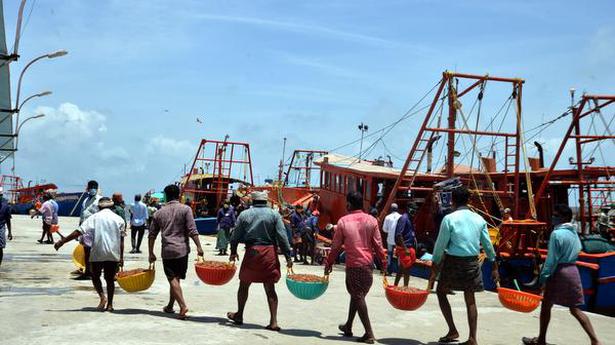 Instead of the festive hubbub it was all confusion and chaos at Neendakara harbour as the trawlers returned with their first catch after an extended break of 64 days on Thursday. Though the boats hauled to shore a fairly good catch, the newly imposed curbs kept agents and exporters away on the first day, much to the disappointment of the fishers. “We had touched waters after an unusually long period due to COVID-19 and the monsoon trawl ban. Many of us had not ventured into the sea since lockdown due to logistical issues. Now we are unable to find buyers. They have left us no option to survive,” says Wilson, a fisher from Kollam.

Though several boats brought back crates full of ‘karikkadi,’ the export quality marine shrimp, it also had no takers. “Now there is no provision to peel and clean them which also leaves several women jobless.”

According to boat owners, the new restrictions have made it impossible for them to sell the catch at a reasonable price. “Entry is restricted and our usual buyers have been denied access and provision to transport the crates. Usually we finish the business within a couple of hours, but today we are struggling to sell. Small boats have no provision to store the fish, so we will have to sell at a much lower price or dump our first catch,” says Robert from Kavanad.

Usually exporters who buy huge volumes of the catch have their own system of loading and transporting the merchandise. “But now the department has introduced a new system that is not practical. We had ventured into the sea with high expectations, but it seems there is no end to our misery,” he adds.

At present, odd and even number boats will be allowed to go to sea on alternate days and token system has been introduced in all auction halls.

“Trawlers have been instructed to return to their base after a 24-hour window. We usually return after 2-3 days and quite a few boats come to the harbour only once in a week. Asking nearly 200 boats to return at the same time instead of 50 or 60 will result in crowding at harbours, making physical distancing impossible. While we are denied our right, boats from other States are plundering our sea. The new restrictions are unscientific and they are taking a toll on our livelihood,” says Peter Mathias, president, All Kerala Fishing Boat Operators Association.