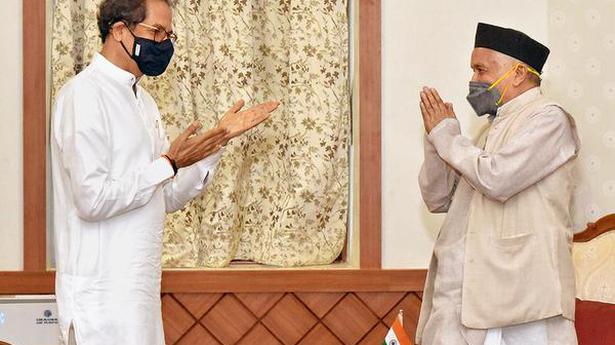 ‘I don’t need your certificate for my Hindutva,’ says Thackeray in response to Koshyari’s letter

The issue of opening of temples in Maharashtra led to a “letter war” between Governor Bhagat Singh Koshyari and Chief Minister Uddhav Thackeray, with the former questioning the Shiv Sena leader’s Hindu credentials. The CM was prompt to reply that he did not require any certificate of Hindutva from the Governor.

After visits by several delegations of the Opposition Bharatiya Janata Party (BJP) leaders demanding opening of temples, Mr. Koshyari wrote to Mr. Thackeray on Monday, asking whether he has suddenly turned ‘secular’ and if he is receiving ‘divine premonition’ to keep postponing the reopening of places of worship.

Mr. Koshyari wrote, “I wonder if you are receiving any divine premonition to keep postponing the reopening of the places of worship time and again or have you suddenly turned ‘secular’ yourselves, the term you hated?” Mr. Koshyari said it is ironic that on the one hand the government has permitted the opening of bars and restaurants, while on the other, our gods and goddesses have been condemned to remain in lockdown.

In response, Mr. Thackeray, in his letter on Tuesday, said, “I appreciate the mention of Hindutva in your letter, but my Hindutva does not require your certificate. My Hindutva does not appreciate welcoming a person with a smile, who termed my State or the capital of my State as Pakistan-occupied Kashmir [PoK].” Mr. Thackeray was making a veiled reference to actor Kangana Ranaut, who compared Mumbai to PoK and visited Mr. Koshyari at Raj Bhavan to share her concerns.

He added, “You seem puzzled as to whether I get divine premonition. I am not as great as you are and therefore I have not such experiences like you. I only observe good and bad things happening in other States and work honestly to do better in Maharashtra.”

Taunting Prime Minister Narendra Modi’s decision to abruptly declare a nationwide lockdown to check the spread of COVID-19, Mr. Thackeray said, “The government’s priority is to save people’s lives while safeguarding their emotions and beliefs. Just as it is wrong to abruptly implement lockdown, it is wrong to suddenly revoke it.” He said the government is currently undertaking the ‘My Family, My Responsibility’ campaign, which involves door-to-door health check-ups. “Maharashtra is the only State in the country to do so,” he said.

Exposing the politics behind the demand to reopen temples, Mr. Thackeray pointed out that all three delegations that met Mr. Koshyari were by BJP office-bearers and supporters. “It could be a coincidence. Let that be. The State government is seriously thinking over these demands and a decision in this regard will be taken at the earliest,” he said.

Talking to reporters, Shiv Sena MP Sanjay Raut was critical of the Governor’s letter. He stresed on the Sena’s commitment to Hindutva. “Nobody should have a question in mind about whether one is Hindutvavadi or not. It only needs to be seen if the government is being run as per the Constitution or not,” he said, without naming Mr. Koshyari.

State Congress chief and Revenue Minister Balasaheb Thorat said Mr. Koshyari is also the Governor of the BJP-ruled Goa, where places of worship are still closed on account of the novel coronavirus. “What the Governor has said goes against the principle of secularism in the Constitution. We think this is not right. Does the President approve of the language used in the Governor’s letter?” Mr. Thorat asked.