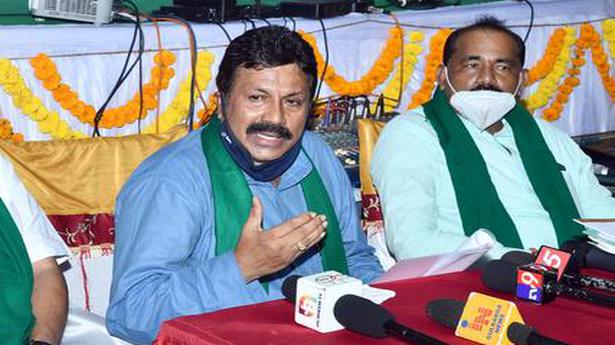 Farmers can summon them to the field to study crop infection and suggest remedies: Minister

As part of its efforts to take advanced farm technologies to the doorsteps of farmers, the government is planning to introduce mobile laboratories which would arrive in the farm fields on demand and examine the crop health, Minister for Agriculture B.C. Patil has said.

Addressing a media conference in Kalaburagi on Wednesday, he said the initiative would be introduced in Koppal district as a pilot project. “Standing crops often get infected and farmers normally don’t know what measures are to be taken. To address this issue, we are going to introduce mobile laboratories which would be equipped with qualified staff and equipment. A toll-free number would be attached to the service, just as 108 is attached to health services. Any farmer whose crop is affected can call the number and summon the laboratory on board to his field. Our staff would examine the affected crop and suggest remedies on the spot. We are going to start it shortly with 20 vans in Koppal district, to which I am the in-charge Minister, and later expand it to the entire State,” he said. He added that the project of issuing identity cards to every farmer with all the details would also be undertaken from Koppal district as a pilot project.

Mr. Patil also indicated that his government was thinking of setting up a soil testing laboratory in each gram panchayat and make them accessible to every farmer.

“Soil testing is a method to know what supplement the soil exactly needs so that we can act upon accordingly. Presently, the soil testing laboratories are largely inaccessible to the farmers for many reasons including the fees that farmers have to pay for the service. We are exploring the ways to realise our Prime Minister Narendra Modi’s call for establishing such centres in each gram panchayat and rationalising the pricing so as to make it affordable,” Mr. Patil said.

Asked about the cancellation of entrance test for B.Sc Agriculture courses and resultant inconvenience to the students with agricultural backgrounds, Mr. Patil clarified that the cancellation because of COVID-19 would, in no way, affect their prospects.

“Some are misleading the people by saying that the government has cancelled the entrance test to abolish the 40% reservation being offered to the sons and daughters of farmers in the admissions to B.Sc Agriculture courses. It is absolute misinformation. The reservation stands. We have cancelled only the entrance test due to COVID-19 pandemic. Urban students with no agricultural background used to get coaching from private agencies and then appear for entrance to perform better than the students from rural areas with an agricultural background. With the cancellation of the entrance test, the coaching classes suffered a setback as they did not get students. The lobby of private coaching centres is behind the spread of misinformation,” he said.

Opposition role is to play politics and not to remain silent, says Stalin