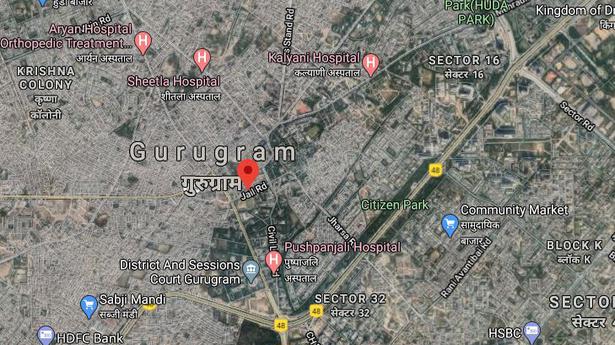 A young man transporting meat in his vehicle was chased by a gang of motorcyclist for around half-an-hour before being waylaid and beaten up in full public view near Jama Masjid main market off Jail Road here on Friday. The police suspect the man, a Muslim, was beaten up on suspicion of transporting beef.

Gurugram Police Spokesperson Subhash Boken said one of the accused, Pradeep, 26, was arrested. “The motive behind the attack is not clear, but it could be prompted by suspicion over transportation of beef. The samples of the meat are taken.”

The assailants are booked under charges of rioting, unlawful assembly, causing grievous hurt and wrongful confinement, among others.

The assailants even broke the windshield of the police vehicle in a bid to pull out the man, Lukmaan, 28. The police had a tough time controlling the mob to take the injured to a hospital. Riding on motorcycles, the assailants, beat up the man behind Jama Masjid main market before they bundled him up in his own vehicle, drove to Sohna Road and again brutally thrashed him.

In one of the videos of the incident, shot in Badshahpur, a man can be seen kicking Lukmaan on the face while he is surrounded by the public. A police man also features in the video trying to prevent the man from attacking the victim.

Lukmaan was driving towards Gurugram from Nuh’s Ghasera village around 9 a.m. carrying the meat to be delivered at Tahir Qureshi’s shop at Jama Masjid main market when he realised that he was being chased. The motorcyclists even tried to waylay him near Sector 56 traffic signal, but he sped up the vehicle, according to the First Information Report. Meanwhile, he called Tahir for help.

“Soon after I received a call from Lukmaan, I rang the Police Control Room seeking their help immediately. I called up the police four times till Lukmaan, being chased by the men, reached the Masjid Market, but no one turned up. I again called up the PCR for the fifth time while he was being beaten up with iron rods and hammers, but the police reached 15 minutes after they had driven away with him,” said Tahir, the president of the Masjid Market. He said the assailants attacked those who tried to intervene.

While he was being thrashed near Jail Mor, a policeman informed at Badshahpur police station and a team reached the spot to rescue him.

Tahir said that Lukmaan had no personal enmity with the assailants and he was beaten up on suspicion of carrying beef. He claimed that he had been running the meat shop for almost five decades now and not indulged in any illegal activity.

Mumbai: Search on for leopard spotted in Andheri’s MIDC area |...