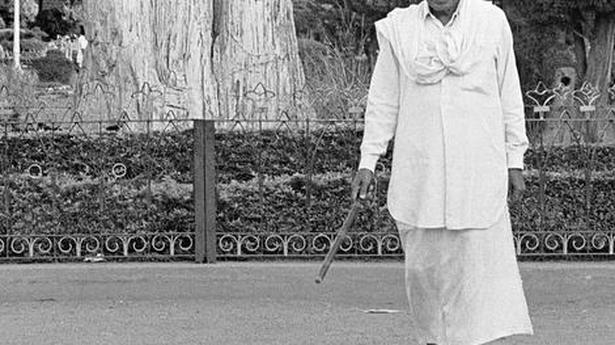 Saturday marks the birth centenary of noted educationist, physicist, freedom fighter and rationalist H. Narasimhaiah. Given his simplicity — always clad in Khadi panche and jubba and living in a student hostel — he would have shunned any ostentation around the day if he were alive, say his long-time associates at the National Education Society (NES). HN, as he was fondly called by students, taught physics at National College at Basavanagudi, which was run by the society, and later headed it.

In a way befitting his memory, the society has decided to mark the centenary with a year-long expansion of laboratories for Internet of Things, Robotics, Data Science, and Artificial Intelligence at National Colleges, said S.N. Nagaraja Reddy, secretary of NES.

Born into a poor family at Hosur, Kolar district, in 1920, the young Narasimhaiah walked to the city (over 85 km away) to join National High School in 1935. The school also became a platform for his interaction with Mahatma Gandhi the very next year, when the latter visited it and young Narasimhaiah was the translator for his speech. He became a lifelong Gandhian. He was jailed during the Quit India Movement. While he went on to do his Ph.D in nuclear physics at Ohio State University in 1960, he remained a strong votary of non-violence and peace and idolised Albert Einstein.

Since the day he joined National High School, he remained associated with NES till his last breath. He studied, taught at, and headed it for decades, and also expanded its horizons. He went on to be Vice-Chancellor of Bangalore University in 1972-77, when he shifted it to the Jnana Bharati campus, and started many departments — Performing Arts, Psychology, Business Administration, and Mass Communication.

“He believed education and rational thinking were the means to uplift the masses. He started five schools and colleges in remote villages of Kolar district, including at his native Hosur, taking affordable public education to the underdeveloped district’s villages,” said H.V. Venugopal, a former principal at National College, Basavanagudi.

A firm believer in science, Narasimhaiah is best known for his campaigns against godmen and their so-called miracles. “He was a rare public intellectual — a sceptic and rationalist who questioned godmen and all claims of miracles. He influenced a generation of youngsters to question,” said Dr. Venugopal. Narasimhaiah instituted the first ever Committee to Investigate Miracles and Verifiable Superstitions within Bangalore University, when he was V-C.

The committee’s efforts to probe the miracles by Sathya Sai Baba, who often conjured sacred ash, lemons, watches, and gold ornaments out of thin air, led to a heated debate in the State. “If Sai Baba can create objects out of thin air, I request him to give me a pumpkin,” he once famously said.

Narasimhaiah resigned as Vice-Chancellor when Govind Narain, a Sathya Sai Baba devotee, took charge as Governor of the State in 1977. “I thought about it. The Chancellor is a devotee of Sai Baba, while the Vice-Chancellor is the chairman of the committee to investigate his ‘miracles’. I resigned to avoid any conflict,” he wrote in his autobiography Horatada Hadi (A Path of Struggle). The very next day, he returned to National College and resumed teaching. His work as chairman of the legislative committee that probed incidents of Bhanamati (black magic) in Kalaburagi and Bidar in 1980 played a key role in creating awareness that some of them were manifestations of mental health issues and were treatable.

“The rationalist movement in Karnataka was a low-key affair until he started creating ripples,” said Narendra Nayak, president of the Federation of Indian Rationalist Associations. He was instrumental in starting Karnataka Rajya Vijnana Parishat and Bangalore Science Forum — two forums that have been working for decades to spread scientific temper.

Narasimhaiah was a lifelong sceptic with one motto — “never accept anything without questioning” — something he borrowed from Gautama Buddha. “His motto is all the more relevant now. In an age of cult following in every sphere of life, the only way we can rescue ourselves is by a simple act — questioning,” said Nagaragere Ramesh, former principal of an NES college.

Promoter of arts and Kannada

National College turned into a vibrant theatre hotspot in the city under the tutelage of Narasimhaiah. The annual inter-class drama competitions were where many lead actors of Kannada cinema took to stage for the first time in their lives. He had a keen interest in not only theatre but in all art forms. He started the Performing Arts course at Bangalore University and Bangalore Lalitha Kala Parishat. A passionate votary of primary education in Kannada, he also headed the Kannada Development Authority.

Narasimhaiah once wrote a letter to the city’s civic body about the pathetic condition of vans transporting the dead, and ended it with the line, “The vans should be maintained so well that one should feel like going and sleeping in them”. The “Nale Baa” writing on doors to ward off ghosts become “Ivatte Baa” (come today only) on his hostel door. Even on his deathbed, he joked of his cremation, asking his students and colleagues to use only dried firewood as only that would ensure he did not wake up coughing.