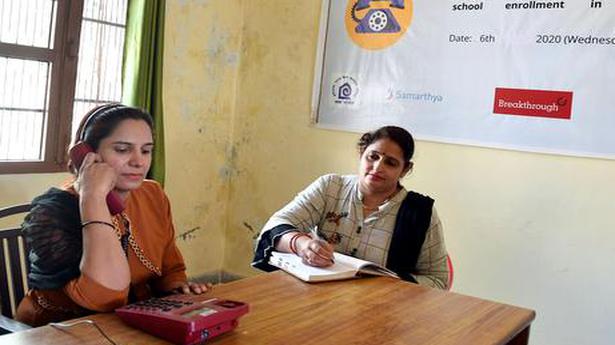 In a patriarchial society, phones are being kept out of reach of girls for fear of misuse

Panic-stricken Gauri, a student of Class IX who doesn’t use a surname, recorded a quick audio message to alert a community worker that her father had forbidden her from using a mobile phone to access pre-recorded school lectures. Two months since the incident, in her district of Sonipat in Haryana, the local administration on Tuesday launched a toll-free helpline in collaboration with NGOs Breakthrough and Samarthya to reach out to students like her who are at risk of dropping out.

Fourteen-year-old Gauri’s classmates remember her as a hard-working student, who attended school despite sickness or heavy rain. She is also known to take keen interest in both dancing as well as martial arts. Today, her friends in Rewli village are unaware of her whereabouts.

Her father, 46-year-old Radhey Shyam, says she has been sent to her elder sister’s marital home to help her with household chores. “Phones can be easily misused. Children will use them to talk rather than study. It is an issue when your children are growing up, more so when they are girls because it becomes a question of their honour,” the family patriarch explains in a telephonic conversation.

The COVID-19 pandemic, followed by a nationwide lockdown, forced schools to shut down. When restrictions began to be eased, classes moved online. With the Union Ministry of Human Resources and Development issuing guidelines for schools to re-open from October 15, Haryana plans to ask students from Class 9 to 12 to return to schools while others will continue to take video lessons, explains District Education Officer, Joginder Hooda, who launched the helpline.

The toll-free helpline (1800180135) aims to provide counselling to children with mental health problems due to COVID-19, lend an ear to those unable to cope with academic challenges, counsel parents threatening to deny access to school education due to gender bias and extend career guidance. It will also help parents who are migrants from States like UP and Bihar apply for admissions for their children after their families were displaced during the lockdown.

Five resource persons will operate the helpline, who will then put callers in touch with a counsellor from a pool of 60 psychologists, psychiatrists, NCERT- and CBSE-certified career and academic counsellors. Various school principals in the district will be responsible for disseminating information about the new helpline among students through WhatsApp groups.

“Dropping out of school or school closures for a long period of time have the potential of exacerbating cases of early marriage. Since families treat school expenditure on girls as a liability, when schools are shut, parents think marriage is the best possible solution. Statistics show that if girls are in school, the chances of marriage become much less and the longer they are in education, the longer they are able to delay marriage. If they can stay longer in education, their aspiration for themselves change, they are more self-aware and able to exercise their agency,” explains Sohini Bhattacharya, CEO, Breakthrough India.

Past experiences of natural disasters and humanitarian crises have shown how disruption in schools results in an increase in child marriage. During the 2004 tsunami, girls in Indonesia, India and Sri Lanka were forced into marriage with tsunami widowers. School closures during 2014 West Africa Ebola outbreak and 2015 earthquake in Nepal, too, resulted in a spurt in child marriages. Up to 2.5 million additional girls are expected to marry over the next five years as a result of the economic impacts of the COVID-19 pandemic. This is in addition to the 58.4 million child marriages that take place every five years.

Online classes have proved to be very challenging for most students in Rewli village where power cuts are common, internet data unaffordable for families with limited means and access to phones is limited, especially in families where there are three to four school-going siblings but only one phone available. Add to this, the challenges that are unique to girls.

15-year-old Priyanka Sahni is able to spend only one hour studying at home during her “school hours” of 8am to 2pm. “Because I am now at home, my mother asks me to help her with domestic chores.” A demand never made of her brothers. Her household responsibilities have more than doubled as she has to sweep and swab the house clean, wash utensils, in addition to helping her mother in the kitchen, which she also used to do before the lockdown.

Her classmate, Kajal Kanaujia, complains that she even has to do the heavy lifting at home such as fetch water, even though her brother is the one with perks like owning a phone.