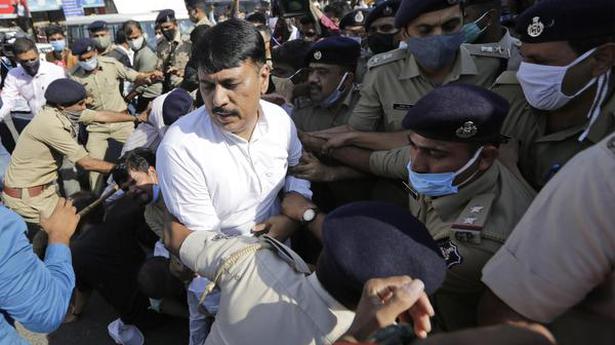 Gujarat Congress president Amit Chavda, working president Hardik Patel and several party workers were detained on Wednesday before they could take out a rally demanding justice for the Dalit woman who was allegedly raped and killed at Hathras in Uttar Pradesh.

The Opposition party had announced to take out the rally for which the police permission was denied owing to the pandemic.

Mr. Chavda and others were detained on the Ahsram road while Mr. Patel and MLA Shailesh Parmar were detained at their residences.

“We wanted to take out the rally from Kocharab Ashram to Mahatma Gandhi’s Sabarmati Ashram for justice to the victim,” said party MLA Naushad Solanki.

He said he had assured the police of observing all measures like wearing a mask and maintaining social distancing, but still the permission was denied.

He said the rally was not political as the only agenda was to demand justice to the victim and her family and raise a voice against crimes against women.