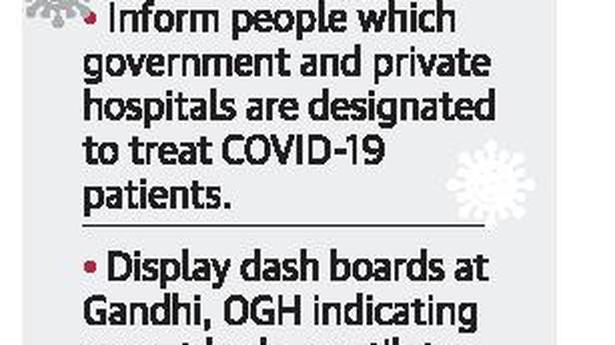 Taking an exception to the staff of Gandhi hospital refusing to treat citizens for coronavirus unless they produce reports of testing positive, Telangana High Court on Tuesday instructed the government to ensure every citizen approaching that hospital with COVID symptoms was attended to.

Passing a common order in a batch of five PIL petitions over different issues relating to the government’s handling of the pandemic, the HC said it was surprising that Gandhi Hospital staff was not conducting coronavirus confirmation tests despite having 1,500 rapid antigen test kits. As Director of Medical Education K. Ramesh Reddy, who attended the hearing through video conferencing, contended those 1,500 kits were meant for testing pregnant women at the Gandhi Hospital, the bench of Chief Justice Raghvendra Singh Chauhan and Justice B. Vijaysen Reddy observed his argument was ridiculous.

“Britishers took better care of us during their rule when Spanish flu struck,” the bench remarked. The bench categorically stated that government and officials should understand that ‘citizens carry on their sleeves and chest’ the right to medical attention under Article 21 of the Constitution.

Expressing dismay over the DME’s explanation the bench asked the government, “why are non-pregnant women and other patients are not being subjected to COVID tests at Gandhi Hospital despite availability of the facilities”. The DME’s contentions were “high-handed and unsympathetic”, the bench said.

When the hearing began, Public Health Director in-charge G. Srinivas informed the bench that 1,500 rapid antigen test kits were made available at Gandhi Hospital. An order was placed for one lakh more kits, he said. Referring to reports that people coming to Gandhi Hospital with COVID symptoms were being turned away by the staff, the bench asked the DME why the testing kits were not being used.

With the DME maintaining that those kits were meant for pregnant women coming to the hospital, the bench remarked that it could not imagine such an arrogant stand from the government.