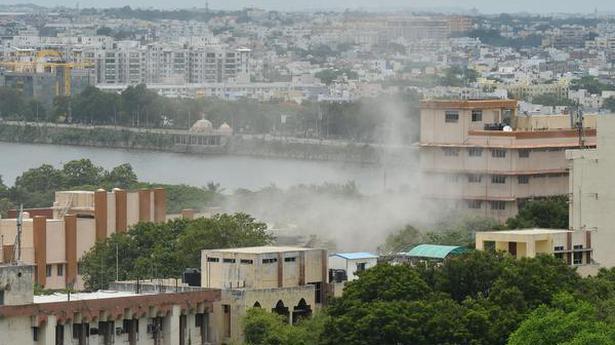 A bench of Chief Justice Raghvendra Singh Chauhan and Justice B. Vijaysen Reddy, hearing a PIL plea challenging demolition of Secretariat buildings, passed the direction. The bench said that it is extending the stay order since the petitioners’ counsel Chikkudu Prabhakar and Advocate General made different interpretations of a crucial point in the case.

Presenting his arguments, Mr. Prabhakar said the Centre had issued an Environment Impact Assessment Notification on September 14, 2006 under the Environmental Protection Act. This notification deals with demolition and constructions of any structures. It mandated a detailed procedure of securing prior environmental clearance from the authority concerned to bring down a structure.

The Supreme Court and the erstwhile Andhra Pradesh High Court upheld this in a catena of judgments, he contended. As per the notification, the State government should have obtained environmental clearance from the regulatory authority or agency concerned before getting down to the work of demolishing Secretariat buildings, the lawyer argued.

Demolition of the building falls within the meaning of “preparation of the land” to erect a new structure. Hence the State government cannot bring down Secretariat buildings without securing an environmental clearance certificate from the appropriate authority, Mr. Prabhakar maintained.

Demolition of an existing structure or clearing the land to erect a building cannot be termed as preparation of land for construction, he argued. With the petitioners’ counsel and the Advocate General giving different interpretations over the point of ‘preparation of land’, the bench extended the stay order till Thursday.

During the previous hearing, Mr. Prabhakar argued that the demolition taken by the government is illegal as it did not adhere to rule 4 (3) of Demolition and Construction Waste Management Rules-2016. However, the government presented papers before the court stating that it had complied with that rule.