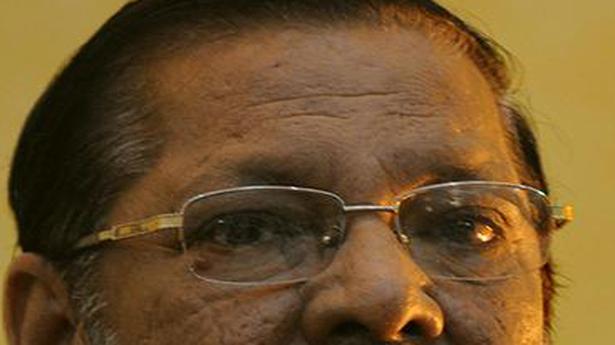 The Madras High Court on Saturday refused to cancel an interim bail granted by the Principal Sessions Court here on May 23 to Dravida Munnetra Kazhagam organising secretary R.S. Bharathi, also a Rajya Sabha member, in a case booked under the Scheduled Castes and Scheduled Tribes (Prevention of Atrocities) Act of 1989.

Justice M. Nirmal Kumar rejected a plea by the Central Crime Branch, attached to Greater Chennai police, to cancel the interim bail granted till May 31 on the ground that the family members of the accused were doctors and hence, if he was lodged in prison, there was a possibility of the other inmates testing positive for COVID-19.

The judge also allowed a direction petition filed by the MP and directed the Principal Sessions Court to consider grant of regular bail to him right on the day when he chooses to surrender before the court.

The Sessions Court had on May 23 itself directed the accused to surrender before the court on June 1 without fail subject to orders passed by the High Court.

When he was arrested and produced before the Sessions Court for being remanded to judicial custody on May 23, a battery of lawyers including senior counsel N.R. Elango, P. Wilson and advocate R. Girirajan claimed that the arrest was politically motivated. They pointed out that the direction petition related to surrender was pending in the High Court since May 21.

Despite having taken notice in that petition, the police had deliberately transferred the First Information Report (FIR) from Teynampet police station to the CCB and arrested the sitting MP, they said. The court was also informed that the MP’s wife and son were attending ward duty at a Government General Hospital and therefore he himself was in home quarantine.

Agreeing with the counsel, Principal Sessions Judge R. Selvakumar said the police appeared to have abused their power and arrested the accused by transferring the FIR behind his back after having taken an adjournment till May 27, before the High Court, in the direction petition. He, however, agreed with the prosecution that a prima facie case had been made out against the MP.

Therefore, after remanding him to judicial custody till June 5, the Sessions Judge said: “The claim that the family members of the accused are doctors is undisputed. While so, in view of COVID-19 situation prevailing, there are possibilities of infection to the other inmates of the jail due to the admission of the present accused in the jail.”