Home News National Heritage bridge across Kapila to be conserved 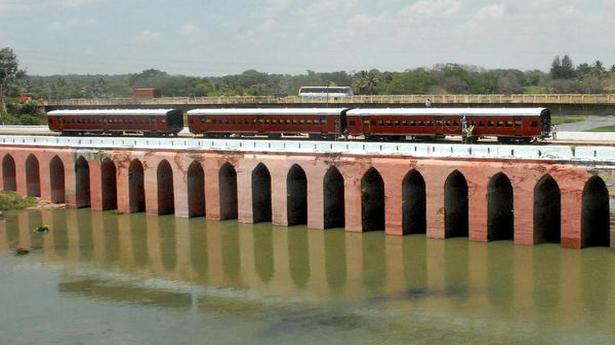 It was built in Gothic style and is unique in design as it accommodated metre-gauge railway line parallel to road traffic.

Mysuru division of South Western Railway (SWR) will initiate measures to conserve the bridge across the river Kabini or Kapila at Nanjangud, which is reckoned to be more than 280 years old and is one of the oldest bridges in the country.

The bridge was in existence even before the advent of the Railways and was used by bullock carts, horse carriages, and pedestrians to cross the river. It was constructed in the 1730s by Dalvoy Devaraj, a local chieftain, and a railway track was laid over it when the metre-gauge link connecting Mysuru to Nanjangud was laid and commissioned in 1899.

This engineering marvel was built in Gothic style and is unique in design as it accommodated metre-gauge railway line parallel to road traffic. The bridge measures nearly 225 meters in length and has 56 piers, and the last metre-gauge train that ran over the bridge was on January 17, 2007. After that, it was closed to traffic.

Consequent to the conversion of the railway line to broad gauge, a new bridge was commissioned in 2008 and this vintage structure fell into disuse.

But now, the Mysuru division has decided to conserve the rail-road bridge for posterity, given its heritage status, and plans to restore it at a cost of ₹50 lakh. This entails clearing the bushes and vegetation growth on the structure, plastering damaged piers, paying attention to damaged parapet walls and the road, colour washing the bridge, and illuminating the structure. It will also have signage complete with the history of the structure.

Aparna Garg, Divisional Railway Manager, Mysuru, said Indian Railways had a vast heritage and was always in the forefront to take measures to preserve it as it narrates the Railways’ growth in India. In the same spirit, the Mysuru division of SWR is taking proactive measure to preserve the old rail-cum-road bridge across Kapila river.

She conducted an inspection of the heritage structure along with senior divisional engineers on Friday and said a detailed proposal would be prepared to protect the “one of its kind” structure, duly reflecting its old glory. The restoration works will pay attention to the damage inflicted on the structure with age and elements of nature. The aim will be to strengthen the structure without compromising on the heritage facade.

Live updates | Don’t lower your guard until there is a vaccine: PM Modi