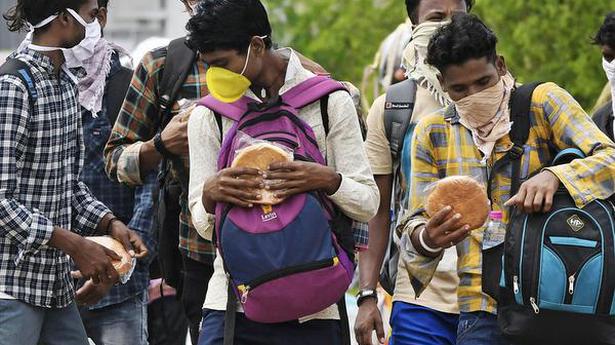 With a petitioner claiming that several migrant workers got stranded at Medchal on Hyderabad-Nizamabad highway and the government refuting it, Telangana High Court on Thursday appointed lawyer K. Pawan Kumar as commissioner advocate to ascertain facts.

The advocate commissioner, accompanied Rangareddy District Legal Services Authority secretary, will visit Medchal and present a report on the matter to the HC by Monday.

Issuing the direction, a bench of Chief Justice Raghvendra Singh Chauhan and Justice B. Vijaysen Reddy asked the advocate commissioner to interact with the migrant workers, assess their condition and understand what facilities the government is extending to them.

The bench wanted Mr. Pawan Kumar to find out if the authorities are making any transportation arrangements like buses or trains for the workers heading to their respective States on foot.

Her lawyer Vasudha Nagaraj contended that these migrant labourers are being dumped on Telangana border in Adilabad by the authorities. Nearly 500 to 600 of them are still stranded in Medchal on city outskirts, the lawyer argued.

However, the government counsel refuted the allegation and told the bench that as on date of hearing, no migrant workers got stranded in Medchal.

In the backdrop of conflicting contentions, the HC appointed the advocate commissioner to secure a ground report on the issue. The petition would be heard again on Tuesday.