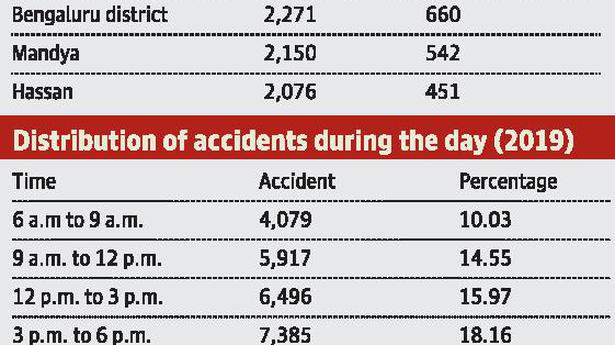 
The year 2019 saw a marginal drop in accidents and fatalities compared to the previous year. As per data released by the Police Computer Wing and State Crime Records Bureau, 40,658 road accidents were reported in Karnataka last year, resulting in the death of 10,958 persons. In 2018, the total number of road accidents was 41,707 and fatalities were 10,990.

The evening hours, with everyone rushing to get back home after work, are when motorists are at risk. The highest number of accidents (21%) occurred at 6-9 p.m. followed by 3 p.m. to 6 p.m., which accounted for 18% of the accidents.

Black spots on highways continue to remain a problem. According to the report, due to higher volume of traffic and speeding vehicles, 58.56% of accidents happened on National and State highways compared to those in districts and other roads.

More than 64% of people who were killed were involved in road accidents on highways. Speeding is a major cause accounting for 38,000 accidents.

Road fatalities are on the rise in Tumakuru district for the consecutive second year. Death caused due to road accidents has increased from 766 in 2018 to 786 in 2019.

Bengaluru, which has the highest number of vehicles in the State, stands second when it comes to fatalities. Last year, 768 people were killed in the city limits, an increase of 82 deaths compared to 2018. Belagavi was third in the fatalities list with 713 deaths.

Transport Commissioner N. Shivkumar said, “The road safety authority will come out with various measures to bring down the number of accidents that include increasing awareness. The department is also introducing driving tracks in Hassan, Shivamogga, Dharwad and other areas.”

The department is also planning a vehicular traction system to reduce the number of accidents.

To control the road accidents in the State, the government has allotted ₹100 crore for various projects, of which ₹25 crore was released on July 31.

In the State, 4,790 two-wheeler riders lost their lives in road accidents. Data shows that 43.71% of deaths involved people on two-wheelers.

Initiative to gift a meal to those in need