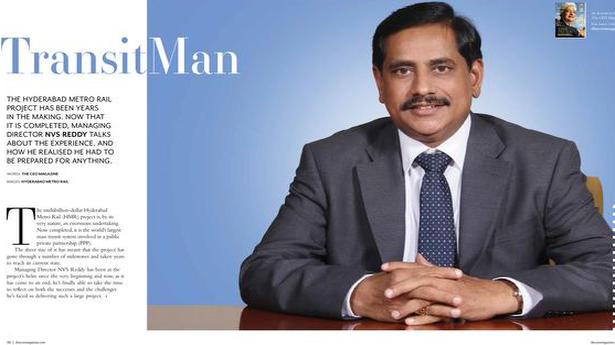 Hyderabad Metro Rail Managing Director N.V.S. Reddy has been featured as one of the top inspirational CEOs of South Asia in the August-September edition of global magazine ‘CEO’ published in cities of Sydney, Singapore and so on. The latest magazine has prominent industrialist and philanthropist Azim Premji on its top cover.

The magazine described Mr Reddy as “Transit Man” and highlighted his leadership and problem solving skills. It carried out his interview, ending it with his quotes like “You have to be able to live and breathe a mega project like this. You also need to have the courage to believe that you can solve any problem that arises”; and “Beyond that, you have to also be a leader who can motivate a team and create a work environment that is honest and filled with integrity”.