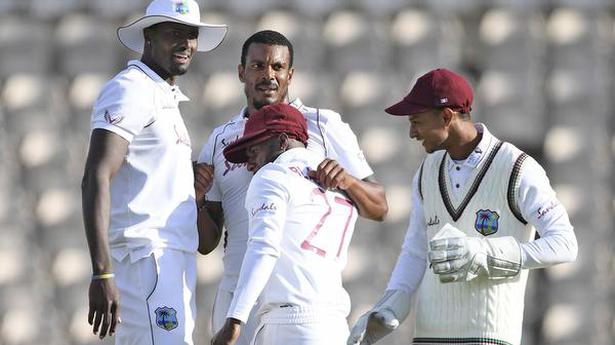 Fast bowler Gabriel was named Man-of-the-Match after returning match-figures of nine for 137 as international cricket returned from lockdown.

The 32-year-old Trinidad quick was originally named as a travelling reserve after he recovered from ankle surgery. But he proved his fitness in two intra-squad warm-up matches and then showed his class as West Indies went 1-0 up in the three-match series.

Gabriel now boasts a fine career record of 142 wickets from 46 Tests at an average of under 30, with Holder telling reporters after stumps: “What Shannon has done in this game is nothing surprising. He has a massive, massive heart and he’s been through a lot.

“He wants success so badly. His body hasn’t held up the way he would like, but to see him back out there fit and well, and bowling fast for the West Indies is always a pleasing sight. He deserves every bit of success he’s had in this game,” said Holder, who himself took a Test-best six for 42 as England was bundled out for 204 in the first innings.

Despite Gabriel’s heroics, West Indies needed to bat well while pursuing the target of 200.

It crossed the line, thanks largely to Jermaine Blackwood’s 95.

Blackwood might not have played if Darren Bravo and Shimron Hetmyer had not opted out of the tour.

“He had an outstanding First Class competition — his case to get back in the team was pretty strong. He’s not a slouch at this level either, he has done well for us and I hope he can kick on,” said Holder about Blackwood.