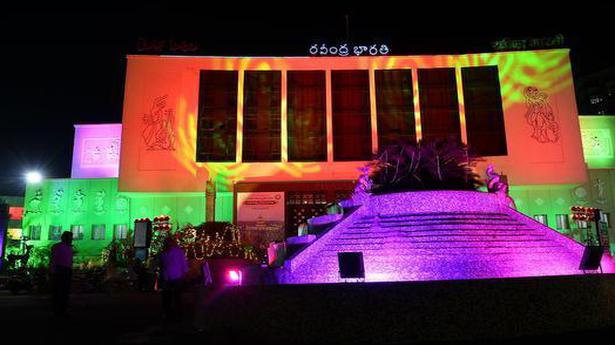 For more than three months now, the iconic Ravindra Bharathi in the heart of Hyderabad has remained silent, as the lockdown brought the curtains down, albeit temporarily, on its activities. In its journey to be a one-stop cultural platform for the young and old, diverse programmes — classical and contemporary music and dance shows, Telugu drama (natakam) and English plays, folk and tribal art shows, workshops, book releases, film festivals, comedy shows and mushairas —are regularly held here. “Ravindra Bharathi offers tranquillity to Hyderabadis caught in the hustle-bustle of city life,” says Sheshagiri Rao, a retired bank employee and regular visitor.

May 2020 (May 7, 1961 foundation day) marked a milestone as Ravindra Bharathi enters 60 years. Sadly due to the lockdown, there were no celebrations. That is not stopping people from recollecting memories associated with it.

Over the past few years, Ravindra Bharathi has seen an increase in the number of programmes being held here. Its main hall that hosts big shows, has a seating capacity of 1000+people, the conference hall on the first floor (150 people capacity) is used for book release functions, literary seminars/ discussions and kavi sammelans. The Paidiraj Preview Theatre (112 capacity) focusses on cinema-related events — from world cinema screenings to short films festivals. Rangasthalam, the space behind the auditorium transforms into an open-air venue for theatre workshops in Kalaripayattu and Karra saamu. The Ghantasala Pranganam at the entrance is an open auditorium where folk and light music shows are held.

“This is the first time that Ravindra Bharati has been closed for such a long time,” says Mamidi Harikrishna, director, department of culture government of Telangana adding the space always reverberated with activities. “It used to be fully packed. Even when there was a fire accident and the space was being renovated, we continued to hold activities,” he adds.

Hamil Kamal, the one half of Dedh Matwale team has many happy memories with Ravindra Bharathi. He and his partner Subhani have presented more than 600 shows here since 1975. “The space is so vibrant. Being in the heart of the city, it is well connected,” he says.

Octogenarian R Chakrapani’s voice swells with pride and excitement as he recalls the first performance — a Kuchipudi dance recital organised by South Indian Cultural Organisation (SICA) which has since has presented thousands of classical events here. “People would look at the cars in the parking lot and guess a SICA event is being held in Ravindra Bharathi. MS Subbulakshmi had performed at Ravindra Bharathi for SICA. Mandolin Srinivas was 10 when I held his hand to lead him to the stage for his first performance for SICA,” says the former secretary and now advisor to SICA.

If the vast parking space at Ravindra Bharathi works in its favour, its technical features are its strength. Chakrapani says, “The acoustics are better than other venues”

Attending a cultural event may seem a distant dream for the time being but it is heartening to see how Ravindra Bharathi is adapting itself to connect with its audience. Harikrishna reveals the department’s YouTube channel has been active in the past three months. “On March 24, we held a virtual kavi sammelanam with the theme ‘Written gift to Corona’. Coordinated by Inampudi Srilakshmi, 450 poems were uploaded by different people, from home,” he informs.

The department also conducted a virtual dance festival and a Telangana theatre online festival. “The virtual performance is an opportunity to expand and reach out to audiences across the globe. An event in Ravindra Bharathi hall is seen only by 1000 +people but a digital performance attracted 7000 views. We are able to connect performers from Adilabad and Warangal to an international audience in Australia and London. We have converted this challenge into an opportunity,” smiles Harikrishna.

Gurugram: On Day 1 of reopening, only 3% students turn up...