Home Cities Chennai How the lockdown helped a key stretch 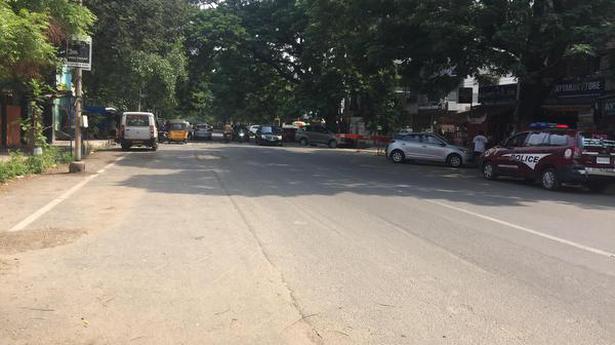 Over the last few months, a raft of improvement works, including repairs of damaged footpaths, tree-pruning, replacement of old bulbs with with LED lights, and painting of speed breakers, have been carried out on Fifth Main Road , which connects Shanthi Colony with Sixth Avenue. To enhance safety, CCTV cameras have been installed by traders and a few residents.

Since a pipeline-laying work was completed in 2018, residents have been persisting with their request to have the road relaid. Last year, the civic officials of Anna Nagar did patchwork on the battered stretch after frequent accidents were reported by the local traffic police. But it was not of much help.

The road was prone to constant wear and tear due to continuous movement of school vans and other private vehicles. During the lockdown, Corporation started taking up various improvement work including removing the encroachments from the road.

“We used to remove such illegal parking frequently but they reappeared again. The lockdown helped us restore the complete road space,” says a Corporation official.

The 60-feet-wide Fifth Avenue Main Road was dug up two years ago by the Chennai Metrowater to replace the existing old water pipelines with new ones in the neighbourhood, covering areas like Shanthi Colony, Fourth Avenue, Second Avenue, Sixth Avenue and 13th and 14th Avenues.