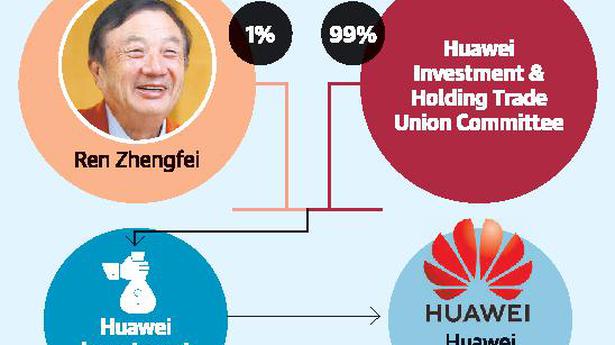 On July 15, the U.S. said it would impose visa restrictions on the Chinese telecommunications giant Huawei, its latest move against a company that has occupied centre stage in the ongoing U.S.-China trade war.

The Donald Trump administration has been pushing countries around the world to ban Huawei’s products, particularly in 5G networks. Under U.S. pressure, the U.K., which in January first indicated it would allow a limited role for Huawei in constructing “non-core” elements of its 5G network, on July 14, reversed its stand, announcing a ban, although operators have been given until 2027 to remove all Huawei equipment from their 5G networks. Reports from the U.K. suggest the move was driven in part by U.S. sanctions announced in May, restricting any company around the world that uses U.S. technology from selling key chipsets and semiconductors to Huawei. Australia, New Zealand and Japan have said they would exclude Huawei from 5G.

If the moves aimed at Huawei are certainly part of a broader U.S.-China competition to dominate technologies of the future — a battle in which many Chinese companies have made huge strides to close the gap with their American competitors — concerns have also been driven by questions surrounding Huawei’s ties to the Chinese government.

The rise of the company has paralleled China’s economic resurgence. Huawei was founded in 1987 with a start-up capital of 21,000 RMB (then around ₹73,000) in Shenzhen, the famous fishing village that would become a centre of China’s manufacturing economy as it opened to the world. Fast forward three decades, and China is the world’s largest trading nation and second-largest economy, while Huawei is the world’s biggest supplier of telecom equipment and, according to the company, the second-biggest manufacturer of smartphones.

Huawei’s founder, Ren Zhengfei, was born in 1944 in a remote rural area of Guizhou, one of China’s poorest provinces. According to his official biography, he trained as an engineer at the Chongqing Institute of Civil Engineering and Architecture in 1963. In 1974, he joined the People’s Liberation Army’s (PLA) Engineering Corps. While much has been made of Mr. Ren’s PLA background, the Engineering Corps, at the time, was not an uncommon choice for aspiring engineers. At the PLA, Mr. Ren was tasked to build a chemical fibre factory. He was promoted to a rank that is the equivalent of a Deputy Regimental Chief, but without a military rank. He left the Army in 1983 when China disbanded much of the PLA Engineering Corps, and started Huawei four years later. Huawei describes itself as “an independent, privately-held company” and says it is “not owned or controlled by, nor affiliated with the government”. The company says it is owned by its employees, who are given shares.

That claim has been questioned. While Mr. Ren owns 1% of Huawei Investment and Holding, the company that owns Huawei Technologies, the remaining 99% is owned by Huawei Investment & Holding Trade Union. In a 2019 paper, Donald C. Clarke of George Washington University Law School and Christopher Balding of Fulbright University Vietnam argued that what Huawei called “employee shares” were “at most contractual interests in a profit-sharing scheme”.

The ownership of the Trade Union, they said, remained unclear. “If Huawei Holding is 99%-owned by a genuine Chinese-style trade union operating the way trade unions in China are supposed to operate, it is in a non-trivial sense state-owned,” they wrote. “Regardless of who, in a practical sense, owns and controls Huawei, it is clear that the employees do not”. Beyond the question of ownership, even “private” companies in China have close ties with the state — all the more so when they are involved in sensitive sectors of the economy.

Moreover, the Chinese government has, on occasion, acted on the behalf of Huawei, treating it as it would a prized asset.

The December 2018 arrest of Huawei’s CFO Meng Wanzhou — who is also the daughter of Mr. Ren — at Vancouver airport by Canadian authorities, acting at the request of the U.S. government that had accused Huawei of fraud regarding sales to Iran, triggered a major diplomatic row between China and Canada. Beijing retaliated by arresting two Canadians, Michael Kovrig and Michael Spavor, who remain in prison, charged with espionage.

In 2019, five former employees of Huawei, who were discussing Huawei’s Iran ties in a private chat on the Chinese social media app WeChat, were within weeks of their conversation arrested by Chinese police, according to a recent New York Times report. A message by one employee saying he could “prove that Huawei sold to Iran” was enough for the Chinese police to arrest all five.

India is weighing a decision to exclude Huawei from its 5G network. Following recent moves to ban 59 Chinese apps and curtail imports of Chinese power equipment for security reasons, analysts have suggested Delhi is considering a ban.

That could cost Huawei billions of dollars in revenue, with India a major overseas market for Huawei’s telecom equipment, which currently powers India’s 3G and 4G networks. In 2018-19, the company reported revenues of ₹12,884 crore from India, up from ₹8,282 crore in the previous financial year.