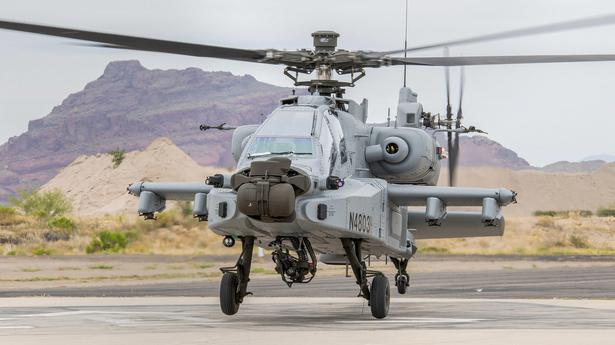 Boeing handed over the last of the five AH-64E Apache attack helicopters to the Indian Air Force (IAF), completing the contract for 22 Apaches. The Apaches were deployed at the Leh air base as part of forward movement of assets amid the stand-off with China in Ladakh.

The final five of the 22 Apache attack helicopters were handed over to the IAF at the Air Force Station, Hindan, in June, Boeing said in a statement on Friday. Earlier in March, Boeing handed over the last five of 15 CH-47F(I) Chinook heavy-lift helicopters to the IAF.

The IAF inducted the first batch of Apaches in March 2019 and based at Air Force Station, Pathankhot in Punjab. While the last five Apaches arrived in India early this year, the handover was slightly delayed due to the COVID-19 lockdown.

India contracted 22 Apache helicopters and 15 Chinook helicopters from Boeing through the Foreign Military Sales programme of the U.S. government in September 2015 under a $3 billion deal. During the visit of President Donald Trump to India in February, India and the U.S. signed a deal for six additional Apaches for the Indian Army.

Boeing’s joint venture in Hyderabad, Tata Boeing Aerospace Limited (TBAL), has been producing aero-structures for the AH-64 Apache helicopter for both the U.S. Army and international customers, the statement said. Boeing’s suppliers in India are manufacturing critical systems and components for the Chinooks, including the crown and tailcone assembly by the Tata Advanced Systems and the ramp and aft pylon by Dynamatic Technologies, Boeing added.