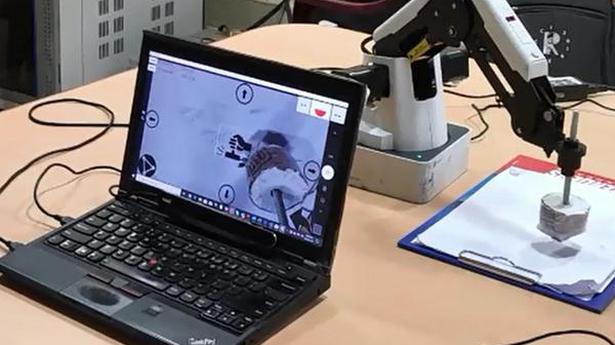 In an invention that could help people with Severe Speech and Motor Impairment (SSMI) ‒ a condition caused by disorders like cerebral palsy in which the patient finds it difficult to physically operate computer devices ‒ a research team has come up with eye gaze-controlled computer interfaces.

The team at the Centre for Product Design and Manufacturing (CPDM), Indian Institute of Science (IISc.), has designed a robotic arm that can be manipulated by eye movement using a computer interface. The interface is through a webcam and a computer, unlike other eye gaze-tracking devices that use head-mounted systems, an IISc. release said.

The team worked with students who have SSMI at Vidya Sagar, an institution for individuals with disabilities in Chennai.

“Many of these students (with cerebral palsy) are not able to precisely focus on a single point in their visual field, due to uncontrolled gaze movement. They are also not comfortable looking at all portions of the visual field equally,” project lead Pradipta Biswas, Assistant Professor at CPDM was quoted as saying in the release.

The team used computer vision and machine learning algorithms to analyse live feed of facial video from the users, and coupled this with an Augmented Reality application to allow the user to use a robotic arm for tasks like picking up and dropping objects, and placing them where they desire.

With this, users can perform mechanical tasks, such as independently work on handicraft, the release added.