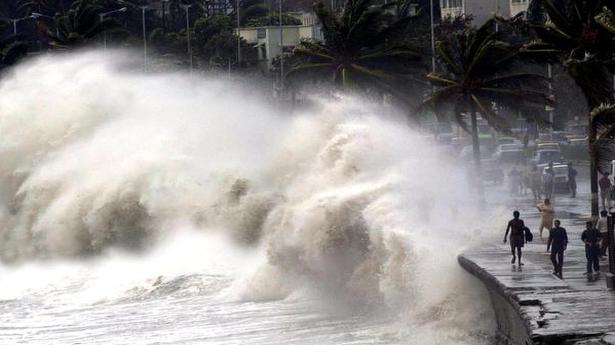 The pre and post- monsoon months form the cyclone season. Storms during October to December, especially in the Bay of Bengal, ravage the eastern coast and damage property.

The India Meteorology Department will release dynamic and impact-based cyclone warnings for districts this season to minimize economic losses and damage to property due to the intense weather system, Director General Mrutunjay Mohapatra has said.

The pre and post- monsoon months form the cyclone season. Storms during October to December, especially in the Bay of Bengal, ravage the eastern coast and damage property.

Speaking on ‘Chasing the Cyclones’ at an event here, Mr. Mohapatra said the new system will give specific warnings. For instance, if a district is to be hit by winds up to 160 kmph, it will warn about the kind of infrastructure that is likely to be damaged and these can be mapped.

Under the system, location or district-specific tailored warnings, which factor in the local population, infrastructure, settlements, land use and other elements, will be prepared and disseminated. All disaster management agencies will make extensive use of cartographic, geological and hydrological data available for the district concerned.

“With India’s growing economy, we aim to reduce the damage and economic losses caused to property and infrastructure. The dynamic, impact-based cyclone warning will be commissioned from this season, Mr. Mohapatra added.

Until now, the IMD gave warnings about the kind of damage expected during a cyclone.

Also Read | What are tropical cyclones and super cyclones?

The National Disaster Management Authority is executing the project and developing a web-based Dynamic Composite Risk Atlas (Web-DCRA) in collaboration with IMD and coastal states.

At the event organised by Indian Society of Remote Sensing’s Delhi chapter on Tuesday, Mr. Mohapatra also pointed out that the damage caused to infrastructure due to cyclones is increasing worldwide.

Separately, the IMD director general reviewed preparedness ahead of the season.

At the meeting, Mr. Mohapatra stressed on the need to learn lessons and fix the recurring mistakes. He also insisted on developing a fool-proof triggering and response mechanism with active participation from all the stakeholders.

He said the IMD this cyclone season will also launch an interactive display system to forecast cyclone track and intensity on GIS platform.