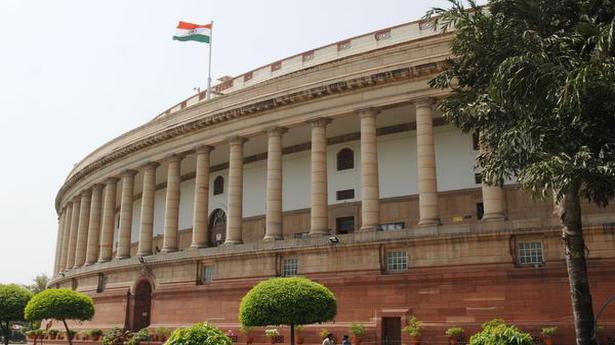 In the first discussion on the COVID-19 pandemic in Parliament, the Opposition members in the Rajya Sabha accused the government of being slow to react because of U.S. President Donald Trump’s visit and imposing an all-round lockdown without due preparations.

Congress’s deputy leader in the House Anand Sharma opened the debate by questioning the government’s claim that the lockdown imposed on March 26 saved the spread of COVID-19 to 14-29 lakh persons. “The House must be informed as to what is the scientific basis on which we have reached this conclusion that but for the sudden lockdown, the number of cases could have risen by 29 lakh. The day the lockdown was imposed, there were 600 cases. But, as we are discussing this subject, there are 50 lakh cases and almost 82,000 deaths. This is the true picture,” he said.

The government’s claim that the death rate was one of the lowest in the world was also false, as neighbouring countries Pakistan, Bangladesh, Nepal and Sri Lanka have reported fewer deaths. The abiding image of migrant workers trudging back to their homes on highways was what the world saw, he stated.

Trinamool Congress leader Derek O’ Brien said there was need to understand the chronology of the events. The first COVID-19 case was found in India on January 30. “What was happening on February 24? Donald Trump was visiting India and was being hosted”. While the State governments were busy preparing for the pandemic, the Union government was busy hosting him. “Now you come to 26th of March — demonetisation 2. A 21-day lockdown with a four-hour notice! My question to this government is this. You said you had 43 videoconferences. Yes. Please give us the dates of those videoconferences. Did you hold one before 26th of March?”

Mr. O’ Brien noted that on public expenditure, for every ₹100 spent on health, ₹63 was spent by the State government and the remaining by the Centre. None of the suggestions given by Opposition parties, including cash transfers for the poor and best practices of different State governments, was adopted by the Centre. “This government needs the humility to work together with the States”, he said. Subsuming the MPLAD funds into the PM CARE Fund was a way of using the pandemic as an excuse to turn democracy into autocracy, he alleged.

DMK’s Tiruchi Siva charged the government with a delay in imposing lockdown because of Mr. Trump’s visit. He alleged that the government was under-reporting the cases. “India had the strictest lockdown in the world and the worst outcome post lockdown”.

Samajwadi Party’s Ravi Prakash Verma said the Indian airports were not closed just to oblige Mr. Trump. He alleged that wherever Mr. Trump’s entourage went in Delhi, Ahmedabad and Agra, it became a hotspot. “We must remember, this disease was brought from abroad, it wasn’t there in our country,” he said.

Many MPs raised the issue of non-payment of dues to the State governments. “The Centre owes the States ₹8,000 crore but you don’t even want to talk about it,” TRS’s K. Keshava Rao said.

The debate saw angry protests from the Opposition parties on the curtailed discussion for four hours. “People’s representatives sit here. We are not beggars, this is our right. Why three hours, this is a debate that should have gone for three days,” Mr. Sharma said.

Congress Chief Whip Jairam Ramesh in a tweet expressed disappointment. “Deeply disappointing that Members were not allowed to speak fully on the COVID-19 situation in the Rajya Sabha today. What is the point of having this session and MPs coming from all over the country, if even on COVID-19 MPs have severe time restrictions while speaking,” he said.