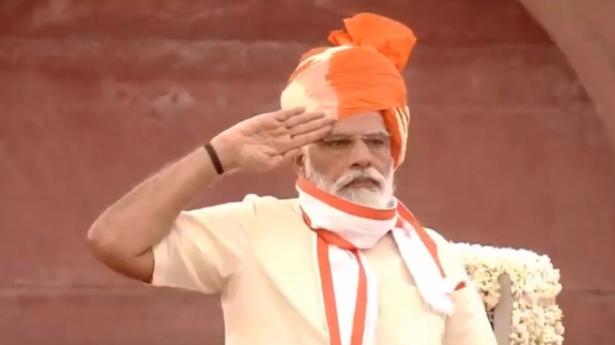 The PM also received the Guard of Honour contingent, consisting of one officer and 24 men each from the Army, Navy, Air Force and Delhi Police. Major Shweta Pandey assisted the PM in unfurling the National Flag, following which PM Modi addressed the nation.

Here are the updates from his speech:

In the last six years, we have initiated many programmes for the welfare of those who labour. DBT, subsidised gas connections, Ayushman Bharat, aawaas Yojana — these have been initiated to help our people in a transparent manner.

During the coronavirus pandemic, these measures have helped distribute free rations to 80 crore Indians, and ₹90,000 crores have been transferred to bank accounts of the beneficiaries.

The Gareeb Kalyan Rozgar Yojana was launched to help people get jobs in their own hometowns and villages. Re-skilling and upskilling have been prioritised. For street vendors, institutional credit is a reality.

In the same way, inter-State labour needs good housing and seeing this, we have launched schemes for housing.

There are sections of society who get left behind; but for Aatmanirbhar Bharat, balanced development is important. We have identified 110 aspirational districts which are below the national average in terms of various indicators and we have devised programmes for their upliftment.

Today, many big companies of world are turning to India: PM Modi

Even as we battle the coronavirus pandemic, we have had cyclones, locust attacks, earthquakes, floods etc. But despite this, India did not lose its confidence.To lift the economy from the effect of coronavirus, we have launched the national infrastructure fund and set aside more than one lakh crore to this end.

When Atalji [A.B, Vajpayee] was the Prime Minister, he had launched the far-sighted Golden Quadrilateral project. We have to take this forward. We can’t look at infrastructure in silos. It has to be looked at in an integrated manner. Multi-modal infrastructure is the way forward.

Our coastlines are important for world trade, and so we will be making four-lane roads leading up to our ports.

Our Shastras say that the basis of any society’s freedom is its prosperity and is based on the labour of its people.

Mindset today should be ‘vocal for local’, says PM Modi

“Even in the space sector, we have made changes for moving ahead. Our progress on space, health, power sector etc benefits our neighbours and the rest of the world. We have to find ways where goods made in India attract praise,” says the Prime Minister in his speech, adding that India has to leverage our human resource to achieve this.

For example, during the coronavirus pandemic, our people and industry took up the challenge. Earlier, we did not produce N95 masks or PPE, but now not only do we produce enough for ourselves but we export these as well. We must ‘Go Vocal For Local’. If we don’t promote our products, then who will?

India’s progress is remarkable. Who thought that one day, welfare funds would be directly sent into bank accounts of the poor, space sector would be opened, Essential Services act would be amended, that there would be ‘One Nation One Tax’ or ‘One Nation, One Ration-card’.

Recently, we have seen an 18% increase in FDI, a record. This confidence wasn’t born all of a sudden. For this, India has initiated reforms and made policy changes. Today, along with ‘Make in India’, we must talk of Make For World’.

For how long India will export raw materials and import finished products; country has to become self-reliant: PM Modi

“I have great confidence in the youth of the country. I know that once Indians decide a certain course, they remain firm on it,” says PM Modi, in his speech.

He continues: The first condition for aatmanirbhar Bharat is aatmavishwas — self-confident India. Economic progress must be coupled with humanity and human concerns. Today the world is interconnected and interdependent.

Thus, in keeping with the demand of the times, India too must contribute its bit. For that we must be prosperous and strong. Only then can we contribute meaningfully to the world.

It’s the call of the times that we must evaluate our natural resources. Till what time are we going to export raw material and import finished goods? We must proceed towards value-addition now.

As for the agricultural sector: In the past, we used to import food grain, but our farmers have ensured that not only can we feed our own people, but also feed the world. Our agricultural required certain reforms for further progress, and we have done that.

India’s freedom struggle has become a beacon in the world, say PM Modi

Those in a blind race of imperialism, gave two World Wars to take it to the point of destruction. But in the midst of this, India remained firm in its resolve to be free. History can not deny that India was a bulwark against expansionism.

In the midst of the coronavirus pandemic, 130 million Indians took a resolution to be aatmanirbhar (self-sufficient). It’s not just a dream but a mantra for all Indians.

I know that when we speak of Aatmanirbhar, we (above a certain age) recall our parents asking us to be independent. The minute we turn 21, our family expects us to become self reliant. As a country, we are entering our 74th year. Undoubtedly, what is important for individuals, is important for the country as well.

All attempts were made to root out our cultures and traditions in past, says PM Modi

Despite the coronavirus and other disasters, Independence Day brings in its own enthusiasm and joy, and this year is special because next year we will be entering the 75th year of freedom.

These two years we have to go forward with a firm resolution on the things that we have to achieve.

In our past, under foreign rule, there was never a moment when our forefathers did not desire or fight for freedom. Revered Bapu, Gandhiji, led our struggle for freedom.

Much was done to prevent India from being free; those who ruled us thought they were here for ever, but our struggle for freedom finished their hopes.

They (the foreign rulers) thought that this country with so many languages, places, and princely states would never coalesce into one. But they forgot that there was an underlying unity in this diversity.

My dear countrymen and women, my greetings to you all on this auspicious day of our independence, says Prime Minister Narendra Modi, addressing the nation from the ramparts of Red Fort on 74th Independence Day.

He says: Today, as we breathe the air in a free country, we acknowledge the sacrifice of lakhs of sons and daughters of Mother India who gave their all for our freedom.

Our men in uniform — Army, Paramilitary, Police — who are always ready to defend our freedom and safety: I bow to them.

I also recall Sri Aurobindo Ghosh, who traversed the distance between revolutionary to spiritualism. I bow to him too.

In this time of coronavirus, lakhs of people — our Corona warriors — and who served the people of the country without counting the cost to themselves: I bow to them.

Lakhs have been affected, thousands have lost their lives due to coronavirus. I express my condolences to families of those affected. For the last few months we have been going through one crisis or the other… floods and other disasters. I express my sympathies with those affected and would like to say that the State and Central govts will work together to help all.

The unfurling of the tri-colour is synchronised with the 21 Gun Salute fired by the gunners of the elite 2233 Field Battery (Ceremonial). The ceremonial battery is being commanded by Lt Col Jitendra Singh Mehta and the Gun Position Officer is Naib Subedar (AIG) Anil Chand.

PM Narendra Modi has arrived at the Lahore Gate of the Red Fort, where he is received by Defence Minister Rajnath Singh and Defence Secretary Ajay Kumar.

Red Fort on the eve of 74th Independence Day celebration in New Delhi.


On his arrival at 7.18 a.m. in front of the Lahore Gate of the Red Fort, the prime minister will be received by Defence Minister Rajnath Singh and Defence Secretary Ajay Kumar.

The PM then inspected the Guard of Honour, which was positioned directly in front of the National Flag across the moat below the ramparts.

Capital turns into a fortress for Independence Day celebrations

A day before the Independence Day celebration, the city has been turned into a fortress with multiple layers of security. Due to the pandemic all the necessary safety guidelines will be enforced and arrangements have been made on the rampart for only 100 VVIPs as per social distancing norms.

A senior police officer said that Delhi Police has made multilayered arrangements in connection with the Independence Day celebrations. Necessary coordination has been made with agencies like the NSG, SPG and ITBP. All the agencies will work in close coordination with each other to cater to all kinds of threat inputs. SWAT teams and ‘Parakram’ vans have been strategically stationed and the borders have been sealed.