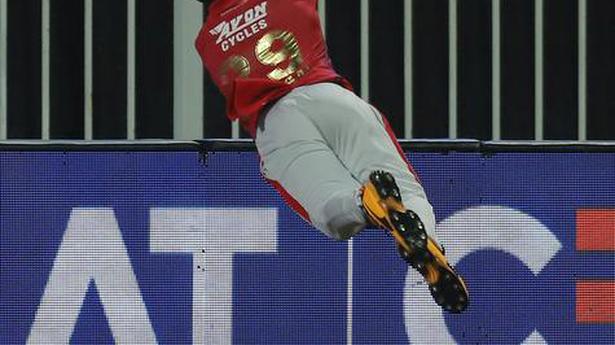 Nicholas Pooran stunned the cricket world and social media with a gravity-defying piece of fielding to prevent a six on a record-breaking night in the Indian Premier League.

Pooran dived cat-like to grab the ball at full stretch six feet over the boundary before twisting in mid-air and backhanding it over the rope a split-second before he hit the ground.

Sachin Tendulkar called it “the best save I have seen in my life. Simply incredible!!” — prompting thanks to the “#godofcricket” from Punjab’s fielding coach Jonty Rhodes.

“(There) really is NO question about it being THE best save, EVER. Fantastic work by @nicholas_47 who inspired the rest of the @lionsdenkxip fielders to put on 1 of the best defensive fielding displays I have ever seen,” Rhodes tweeted.

Former England batsman Kevin Pietersen, commentating on television, was blown away by Trinidad-born Pooran’s “unbelievable” exploit, which resulted in two runs instead of six.

“No way, no way, no way. That is unbelievable! The save of T20 cricket ever, that is the best I have seen,” Pietersen said.

One tweet said it all: “Wowza, superman Nicolas Pooran”!

IPL Super Over: Know all the rules of the tie-breaker | Cricket News – Times of India