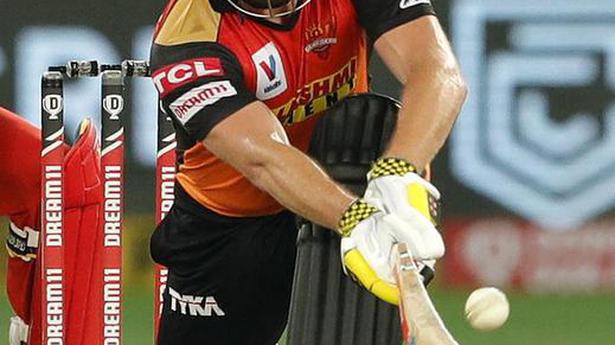 After restricting the Hyderabad side to 142, the Kolkata team wins at a canter.

Earlier, Kolkata Knight Riders kept Sunrisers Hyderabad under check with some tight bowling on a pitch that gradually slowed down. It took a half-century from Manish Pandey (51, 38b, 3×4, 2×6) to guide the side to 142 for four.

Knight Riders’ expensive recruit Pat Cummins, who endured a rough evening with the ball against Mumbai Indians, made amends against Sunrisers, keeping the openers on the backfoot from the start. He was rewarded for his attacking line and length when he cleaned up Jonny Bairstow with an off-cutter in the fourth over after the Englishman had successfully reviewed a caught-behind appeal off the previous delivery.

The Aussie pacer bowled three of his four overs in the PowerPlay, conceding just 11 in those.

David Warner, meanwhile, played well within himself, and showed flashes of aggression by clubbing two fours and a six to help Sunrisers to 40 for one at the end of six overs. Pandey joined Warner after Bairstow’s dismissal, and the pair took a few overs to settle down, only coming up with the occasional boundary.

But just when they looked to switch gears, leg-spinner Varun Chakravarthy dismissed the dangerous Warner (37, 26b, 2×4, 2×6) after the first strategic time-out. The left-hander’s attempted flick caught the top of the bat and the ball ballooned back to the bowler, who completed a simple return catch.

Pandey and Wriddhiman Saha then carried out the repair work with a 62-run third-wicket partnership, but struggled to break the shackles in the face of some tight bowling from Varun and Sunil Narine.

Saha brought up the fifty stand with a six over deep mid-wicket off the last ball of Varun’s spell. The Tamil Nadu spinner finished with one for 25. Shortly after, Andre Russell got rid of Pandey, putting an end to any hopes Sunrisers had of a late flourish.

KKR vs RCB: I don’t think a lot of people have belief in RCB, says Virat Kohli | Cricket News – Times of India

Cricketers from west more likely to have mental health issues, says Misbah on playing in bio-bubble