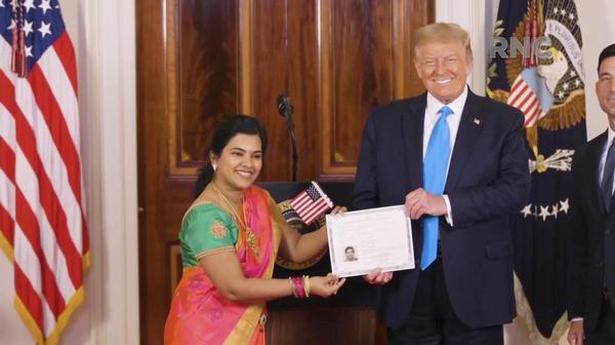 Sudha Sundari Narayanan is a software developer from India.

President Donald Trump has presided over a rare naturalisation ceremony at the White House where five immigrants, including a software developer from India, were sworn in as American citizens, as the US leader welcomed them to the “magnificent nation that is comprised of every race, religion and colour.”

Mr. Trump hosted the naturalisation ceremony at the White House and the video of the ceremony was played during the second night of the Republican National Convention on Tuesday.

Immigrants from five countries – India, Bolivia, Lebanon, Sudan and Ghana, stood in a line during the ceremony in the White House.

With their right hand raised and a US flag in their left hand, they were administered the Oath of Allegiance by Acting United States Secretary of Homeland Security Chad Wolf, while Mr. Trump looked on.

Sudha Sundari Narayanan, a software developer from India, was among those sworn in as American citizens.

“Today America rejoices as we welcome five absolutely incredible new members into our great American family. You are now fellow citizens of the greatest nation on the face of God’s Earth. Congratulations,” Mr. Trump said.

Mr. Trump said the newly sworn-in American citizens followed the rules, obeyed the laws, learned the nation’s history, embraced American values and proved themselves to be men and women of the highest integrity.

“It’s not so easy. You went through a lot and we appreciate you being here with us today. You’ve earned the most prized treasured, cherished and priceless possession anywhere in the world. It’s called American citizenship. There is no higher honour and no greater privilege,” Mr. Trump said adding that it is an honour for him to be their President.

Later, Mr. Trump read out the names and a few details of the five new citizens.

Mr. Trump said Ms. Narayanan is a phenomenal success, born in India, who came to the United States 13 years ago.

Also read: Day One of the Republican National Convention kicked off on Monday

“Sudha is a talented software developer and she and her husband are raising two beautiful, wonderful children ‘the apples of your life’. Thank you very much and congratulations. Fantastic job,” he said.

In his remarks, Mr. Trump congratulated the new citizens and said it is his honour to be with them. He added that with the rights and freedoms each of them now enjoy as citizens, there is no dream beyond their wildest reach because Americans can do anything.

“Today you have also accepted the profound duties and responsibilities that come with American citizenship. By swearing the Oath of Allegiance, each of you has entered a sacred and unbreakable covenant with our nation,” he added.

He added that the US Bill of Rights is now yours to support, protect, and defend. As citizens, you’re now stewards of this magnificent nation, a family comprised of every race, colour, religion, creed, united by the bonds of love.

First Lady Melania Trump also recalled her immigrant journey in the US. During her address at the Rose Garden, she said she arrived in the US when she was 26 years old, adding that living and working in the land of opportunity was a dream come true for her.

“But I wanted more. I wanted to be a citizen. After 10 years of paperwork and patience, I studied for the test in 2006 and became an American citizen. As an immigrant and a very independent woman, I understand what a privilege it is to live here and to enjoy the freedoms and opportunities that we have,” she said.

Immigration featured in addresses during the second night of the convention.

Florida Lieutenant Governor Jeanette Nunez said that as the daughter of Cuban immigrants, her story began in 1959. “Before I was born, when my parents’ dreams of a prosperous life became a nightmare. Chaos spread quickly when Fidel Castro took control of Cuba.”

Immigration has been a very critical agenda of the Trump campaign and his presidency, with Mr. Trump asserting throughout that as the American President he will ensure job security and safety for American citizens first.

As job losses mounted and the American economy suffered due to the COVID-19 pandemic, Mr. Trump ordered some stringent immigration restrictions, including suspending the H1B visas, which is popular among Indian IT professionals, along with other foreign work visas for the rest of the year.

Mr. Trump has said the step was essential to help millions of Americans who have lost their jobs due to the current economic crisis.

Indian IT workers form the majority of H1B visa holders in the US and have to wait decades for Green Cards due to a huge backlog.