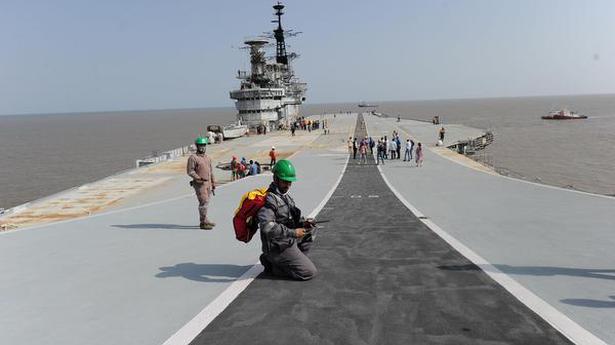 The dismantling of the world’s longest serving warship, INS Viraat, will begin at Alang, three years after it was decommissioned by the Indian Navy.

This Centaur-class aircraft carrier of Indian Navy that remained in service for almost 30 years and holds the Guinness record for the world’s longest-serving warship will be dismantled here at Alang, one of the largest shipbreaking yards globally.

Also read | Viraat cuts through the waves for one last time, to Alang

“This historic warship has sailed almost 11 lakh kms, enough to travel the globe 27 times over”, Shipping Minister Mansukh Mandaviya said addressing an event here to give farewell to the warship.

“Today I pay homage to ex INS Viraat at Alang, Gujarat. INS Viraat served our nation for 30 glorious years and after decommissioning, She is moving towards her last journey for recycling at Alang,” the Minister said.

The Navy’s pride has groomed 40 flag officers including five Chief of Naval Staffs.

He said efforts were made to convert INS Viraat into a museum and several consultations were done but the plan could not materialise as an expert committee reported that it won’t last for more than a decade.

“The government was ready to spend ₹400-₹500 crore to convert it into Museum but an expert committee said its ferrous won’t last and it may result in an accident. Under the circumstances, we had to bid tearful adieu to it,” the Minister said.

Mr. Mandaviya said around 30% of the global ships numbering about 280 are recycled annually at Alang.

“Alang provides employment to more than 30,000 people coming from Odisha, Uttar Pradesh, Jharkhand, Bihar, Gujarat and other states and supports 3.5 Lakh people indirectly through other business activities,” the Minister said.

Capabilities of the ship included maritime and land-based missions as well as engagements in anti-submarine warfare, officials said.

The ship was extensively deployed for numerous operations notably ‘Operation Jupiter’ and the Sri Lankan Peace Keeping Force Operations in 1989, ‘Ops Prakaram’ following the 2001 attack on the Indian Parliament, they added.

The officials said the ship was originally expected to be decommissioned in 2012, but was postponed due to delay in decommissioning of INS Vikramaditya, which was eventually inducted into Indian Navy in 2014.

With mounting operations costs and age, Navy announced the decision to decommission Viraat in 2015, and it was finally decommissioned on March 6, 2017.

“There were plans and even some movements by state governments of Maharashtra and Andhra Pradesh towards preserving it into a Museum. There were also crowdfunding efforts towards the same goal, which remained successful. Ultimately, the Center decided to auction the ship and sold it as scrap,” Mr. Mandaviya said.

The Minister said after the accession to Hong Kong Convention (HKC) 2009, by India and Passing of Ships Recycling Bill 2019 this is one of the major ships that has come to Alang.

He said Alang-based Shree ram Group has won the bid for dismantling the ship and company’s high capacity tugs towed the vessel from Mumbai to Alang on her last journey.

Rear Admiral Puruvir Das Flag Officer Commanding, Gujarat Naval Area, who served on the warship as Navigating Officer termed it a “momentous” occasion and said it has trained thousands of officers and staff and a new Vikraant is getting ready at Cochin Shipyard.

“It is a proud occasion for us. The ship had increased the navy’s capabilities tremendously,” he said.

The aircraft carrier had begun its final journey from the Naval Dockyard in Mumbai on September 19, and reached the waters at Alang in Bhavnagar district of Gujarat on September 22 evening.

“The Viraat spirit will remain in Alang forever as the old ships never die, their spirit lives on,” Mr. Das said.

The warship, which was inducted into the Indian Navy in 1987, was purchased by Shree Ram Group for a sum of ₹38.54 crore at an auction in July this year.

Shree Ram Group Chairman Mukesh Patel said after all the formalities are completed as per the ship breaking code, subject to weather conditions and tide, the company is scheduling its beaching at its yard for dismantling during high tide on Monday.

There were proposals in the past to preserve it as a maritime museum. In July 2019, the central government said in the Parliament that the decision to scrap INS Viraat was taken in due consultation with the Indian Navy.

It is the second aircraft carrier to be broken down in India. In 2014, INS Vikrant was dismantled in Mumbai.

The aircraft carrier, in its earlier avatar, had won the Falklands War against Argentina in 1982 for the Royal British Navy.