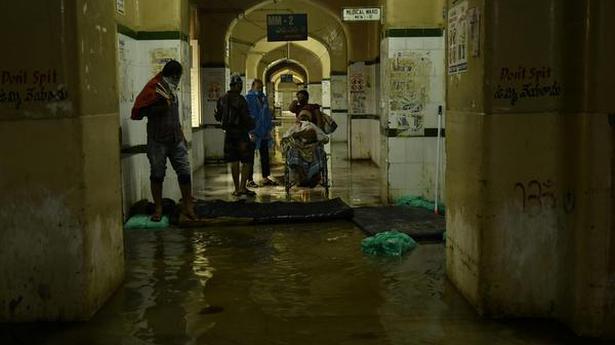 Rainwater flooding Osmania General Hospital’s in-patient ward where critically-ill patients are admitted is not the first such incident. And it will not be the last. The in-patient (IP) building is over a century old and in a dilapidated condition.

Some portions of the building have been declared unsafe for patients, and drainage lines which run through the worn-out walls cannot be repaired. Built in 1917 by the seventh Nizam, Mir Osman Ali Khan, the building is now in a fragile condition due to years of neglect and lack of repairs. On multiple occasions, chunks of lime mortar from the IP’s block ceiling have crashed to the ground, including in the superintendent’s chamber. On one occasion, it fell on a patient admitted to the orthopedic ward.

Bathrooms are so untidy that people who go there have a revolting experience. In fact, stench from the bathrooms on the ground floor hits the nostrils when one passes by. Some of them are non-functional.

The old building’s dome is riddled with holes and rain water falls through it. All these issues lead to repeated problems of flooding and may continue in future too.

For the past several years, doctors and other staff at the hospital have staged novel protests to draw attention of the State government towards the issues. The TRS government in July 2015 had announced that new buildings will be constructed for the hospital. In fact, steps were taken to shift the patients in the IP block to other hospitals. However, the construction work was never initiated.

The protests resumed after promises were not fulfilled. An OGH Joint Action Committee was formed to demand new buildings for the hospital. The protests launched in 2018 continued for over 90 days. On one occasion, junior doctors wore helmets while attending patients to indicate it is unsafe to undergo treatment or to work at the hospital.

Multiple blueprints for the construction were drawn. Ministers checking the plans were circulated to the media back then. Yet, no works were initiated and the issues persist to this day. On Monday, the news of rainwater flowing into the IP ward went viral. On Wednesday, rainwater from stormwater drains flooded the IP ward.

“This issue has to be addressed. There are problems at the out-patient block too. A new building has to be constructed. That is the only solution,” said a senior doctor from the hospital.