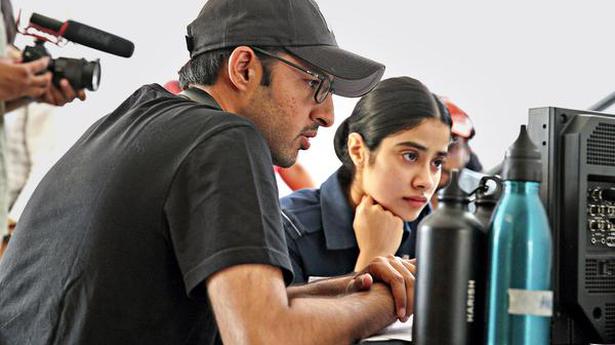 Actor Janhvi Kapoor and filmmaker Sharan Sharma discuss online trolls, misogyny and how Gunjan Saxena’s relationship with her father is like that of Simba and Mufasa

With her sophomore feature film, actor Janhvi Kapoor finds herself drawn into the discussion around nepotism on social media, once again. Encountering trolls and backlash is not unusual for the 23-year-old daughter of late actor Sridevi and producer Boney Kapoor. “It’s not the most fun situation to be in,” she chortles, as we speak on a video call ahead of the release of her latest film, Gunjan Saxena: The Kargil Girl. “Some people feel like I’m not deserving of the opportunities I’ve gotten and done nothing to deserve it, which, in a way, is true, but there is a section that won’t settle for any result, however hard I work.”

Kapoor made her debut in 2018 with Dhadak, a Bollywood adaptation of the critically-acclaimed Marathi film, Sairat. Earlier this year, she acted in Zoya Akhtar’s segment in the Netflix horror anthology film Ghost Stories. While her third appearance, Gunjan Saxena: The Kargil Girl, was made for the big screen, it was later acquired by Netflix for a direct-to-digital release, due to the ongoing COVID-19 pandemic. “Before this recent chatter started, there was a lot of encouragement on social media [for Gunjan Saxena], so I’ve seen the attitude shift on social media, and it’s tough to gauge what is real and what’s not,” says Kapoor.

The actor says she channelises the criticism, even if they are unfounded, into enhancing her performances. In the biopic of Saxena, a 25-year-old Flying Officer, who was the first woman to enter the combat zone in the 1999 Kargil War, Kapoor had to navigate the technical aspects of playing a pilot.

In the film, she traverses the journey of Saxena from a 16-year-old enthusiast to a 25-year-old professional. “When I had seen Dhadak, Janhvi was this innocent, pure and vulnerable person with big eyes. Someone who wanted to do a lot with her life but was a bit timid. I knew if we cast her as an Air Force officer, the world would think, ‘how could she do this?’ That’s the intention of casting her since that’s also the journey of Gunjan ma’am, who was an unlikely hero,” explains filmmaker Sharan Sharma, who is making his directorial debut with the biopic.

On her path to becoming the first woman pilot in the Indian Air Force to go to war, Saxena encountered various levels of misogyny, from everyday sexism to the impervious boys’ club to lack of infrastructural support like women’s changing rooms in the all-male Udhampur air force base. “Misogyny is, unfortunately, a part of all our daily lives,” says Kapoor. “It is quite subliminal sometimes and it’s also a result of conditioning. But the kind of sexism Gunjan ma’am faced or we depicted [in the film], I don’t think I have experienced that in my own life.” In order to evoke emotions, Kapoor relied on her immediate environment on the sets and the support of Saxena, who she could rely on for feedback and insights. “As an actor, I don’t derive from my personal memory bank, that’s a different kind of approach. I prefer limiting my realm of reality to what’s in front of me and limiting it to the frame,” she informs.

Getting the right actors

Saxena’s father, played by Pankaj Tripathi in the biopic, was integral to her success and enabled her to break the glass ceiling. His unwavering support and progressive outlook on gender equality shaped the fundamental years of Saxena’s life. “Getting the right actors to portray that energy was important,” recalls Sharma. “Pankaj and Janhvi naturally formed that bond and she naturally idolises him and his work. Personally, for me, it was like the chemistry between Simba and Mufasa [in The Lion King], because there is mutual respect and understanding but they are not friends.”

Gunjan Saxena is Kapoor’s second Netflix appearance this year. Shot for a theatrical release, visuals and sounds of the fighter jets in the film is an integral part of the experience. Is she nervous that those aspects may be diluted on a streaming platform? “Sharan told me, ‘You don’t realise how important sound is and it can make or break a scene’. So I’m hoping people have good sound systems or can connect to speakers,” she laughs. “But if not, I still believe in the emotion of the film.”

The pandemic has also disrupted her shooting schedule for Dostana 2, which she hopes will resume soon. “Rooh Afza is ready but we are waiting to see how the [release] plays out in terms of the pandemic,” says Kapoor. For now, her focus is firmly on the release of Gunjan Saxena, an important film in the nascent stage of her career.

Formula One: Biggest coronavirus spike in F1 ahead of Russian...