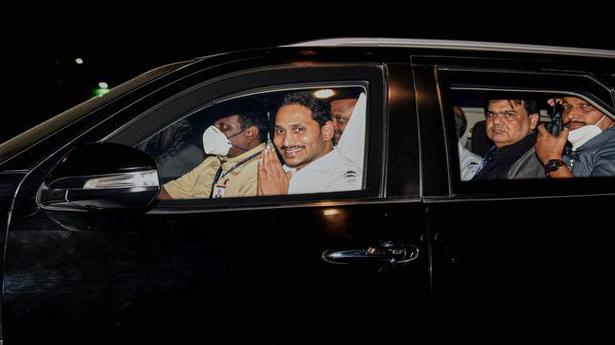 According to information, Mr. Jagan Mohan Reddy brought issues such as pending dues related to the Polavaram project to the notice of Mr. Shah.

The Centre has to clear more than ₹3,000 crore towards reimbursement of the Polavaram irrigation project expenditure. Also more than ₹9,000 crore under various heads is due for many years. The GST compensation and the 14th Finance Commission grants are some of the issues that were discussed, sources say.

The Chief Minister’s previous attempt to meet Amit Shah and others in New Delhi on June 2 did not materialise and he was forced to cancel his scheduled trip.

Mr. Jagan Mohan Reddy will leave Delhi on Wednesday morning and reach the Renigunta airport at 1 p.m. and head for the Padmavati Guest House at Tirumala. He will attend a video-conference from Annamayya Bhavan. At 6.15 p.m., he will arrive at the Bedi Anjaneya Swamy temple. He will go to the Lord Venkateswara temple and present silk robes to the presiding deity.

After an overnight stay, he will go for the darshan of Lord Venkateswara again on Thursday morning. Later, he will lay the foundation stone for the choultries of the Karnataka State Charities at Tirumala.

He will arrive at the Renigunta airport at 10.20 a.m. and leave for Gannavaram.