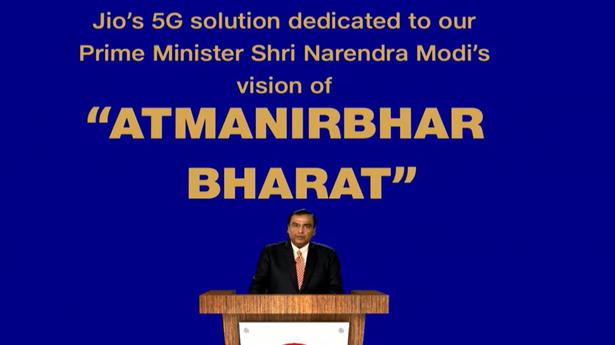 Reliance Industries Ltd.’s Jio Platforms unit has developed a 5G technology which will be deployed in India next year, chairman Mukesh Ambani said on Wednesday.

To aid mass adoption of the technology and to enable millions of 2G feature phone users to graduate to smartphones, Jio and Google would partner to develop an entry level 4G or even 5G smartphone with Android operating system, Mr. Ambani added.

Google also announced that it had agreed to invest ₹33,737 crore to acquire a 7.7% stake in Jio Platforms.

“Jio has designed and developed a complete 5G solution from scratch,” Mr. Ambani told shareholders at RIL’s annual general meeting. “As India is standing at the doorstep of the 5G era, we should accelerate the migration of 350 million Indians who currently use 2G feature phones to an affordable smartphone. Jio is determined to make India 2G Mukt,” he added.

“This Made-in-India 5G solution will be ready for trials as soon as 5G spectrum is available and can be ready for field deployment next year. And because Jio’s converged…we can easily upgrade our 4G network to 5G,” Mr. Ambani said.

Jio planned to export its 5G solution to other telecom operators globally, as a complete managed service, once the technology was proven at India-scale, the RIL chief said.

Sundar Pichai , CEO of Google’s parent Alphabet, said, “Through this partnership with Jio Platforms we see the chance to have an even greater impact than either company could have alone.”

Stating that the investment in Jio would be the first and the biggest investment that Google would make in India from the $10 billion fund announced recently, Mr. Pichai said, “Our joint collaboration will focus on increasing access for hundreds of millions of Indians who don’t currently own a smartphone while improving the mobile experience for all.”