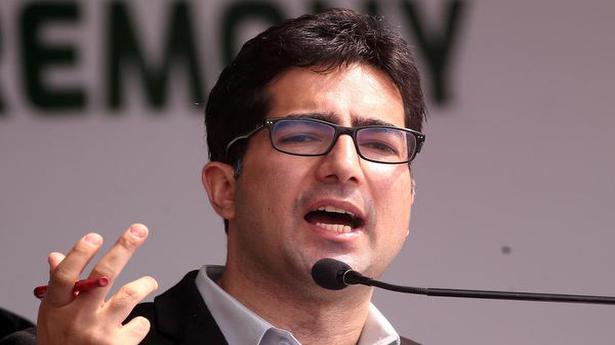 Launched with a lot of fanfare with prominent, young faces 17 months ago, J&K’s youngest political party, the J&K Peoples Movement (J&KPM), is struggling to stay afloat.

Days after IAS topper Shah Faesal announced his decision to quit politics, the other well-known face of the party Javaid Mustafa Mir, a former legislator and minister, also has quit.

“Many young faces are also leaving the party. These is a sense of disillusionment after Faesal’s exit and his recent statements,” a young party leader, who also quit the party, told The Hindu.

Scores of youth were attracted to the party that pledged to “fight corruption and push for peaceful resolution of the Kashmir issue”.

Mumbai-based Kashmiri businessman-turned-politician, Feroze Peerzada, has taken over as the president of the party.

“My first priority is to give confidence to those who joined the party because of (Bureaucrat-turned-politician) Faesal. We are trying to restore the party system. Due to the COVID-19 pandemic, it is not possible to reach out to masses on the ground. But we are intact as a party and will not dissolve it,” Mr. Peerzada told The Hindu.

However, he also said, on hindsight, if the party leaders had had any inkling about the events of August 5, 2019, “Me and Faesal may not have floated the party”.

On rumours of Mr. Faesal returning to the civil services, Mr. Peerzada said, “Faesal’s passport was impounded following the slapping of the Public Safety Act (PSA) on him. If he is given the passport back and allowed to travel, his first priority would be to go abroad for studies.”

He said Mr. Faesal is “also hurt that no one came to his support the way he expected and shed tears with his family during his detention”.

Mr. Peerzada said Mr. Faesal was a very popular across the country. “At a party in Mumbai, Bollywood actor Shahrukh Khan praised his (Faesal) decision saying ‘he is brilliant’,” he added.

Disagreeing with the former IAS officer over “political parties not having much role now in J&K” post August 5, 2019, Mr. Peerzada said, “Time heals every wound. It’s a matter of time. We are hopeful statehood will be restored soon.”

Mr. Peerzada said he has watched closely the working style of senior leaders like Sharad Pawar, Vilasrao Deshmukh during his stay in Mumbai. “I have seen them working on the development agenda. Unfortunately, Kashmiri politicians don’t have that quest. And it’s not easy to run a political party here.”

Pakistan record on 26/11 under scanner ahead of FATF meet

‘Siddipet most suited for seed cultivation’

Playing under Rohit in MI has boosted my confidence immensely, says...

Was more excited than nervous: Ravi Bishnoi on IPL debut |...