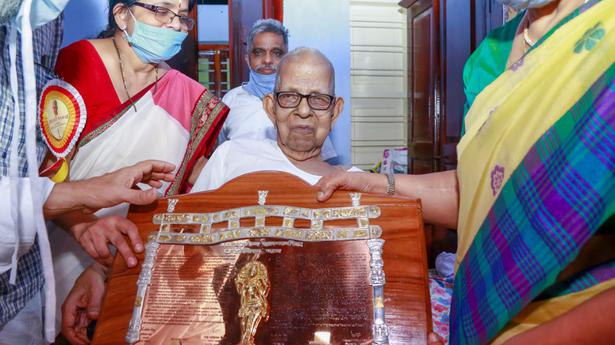 Malayalam literature witnessed a golden moment on Thursday when the Jnanpith Award was handed over to poet Akkitham Achuthan Namboothiri at a special function held at his house at Kumaranallur in the district.

Malayalis across the world had celebrated it when Akkitham became the sixth writer to bring Jnanpith Award to Malayalam literature in November last year. The COVID-19 lockdown delayed the award handing over ceremony.

Speaking on the occasion, the Chief Minister highlighted the virtuous character of Akkitham, who is widely considered the tallest among the living Malayalam poets.

The man who introduced “meaningful modernism” several decades ago in Malayalam poetry, Akkitham is the only living poet being called Mahakavi (great poet) in Malayalam.

He had worked for nearly three decades with Akashvani as scriptwriter and editor. Akkitham had close associations with Communist ideologue E.M.S. Namboodiripad in his early years of career.

His work Balidarshanam won the State and Central Sahitya Akademi Awards in 1972-73. He was the co-editor of the Mangalodayam and the Yogakshemam journals. He was awarded Padmashri in 2017. Apart from the Ezhuthachan Award he won in 2008, Akkitham was bestowed with Odakkuzhal Award, Asan Award, Sanjayan Award, Lalithambika Antharjanam Award and several other honours.

Critics have praised Akkitham for his powerful imagery that ordinary people could easily associate themselves with. The following lines of Akkitham have travelled deep down the minds of the Malayali:

“Velicham dukhamanunnee, thamassallo sughapradam.” Fewer lines in modern Malayalam poetry have gained as much popularity as these.

While poet G. Sankara Kurup won the maiden Jnanpith award in 1965, S.K. Poettekkatt brought the laurel to Malayalam after 15 years in 1980. Four years later, Thakazhi Sivasankara Pillai won the coveted award. M.T. Vasudevan Nair became the fourth Malayali to win the award in 1995. The last Jnanpith reached Kerala in 2007 when O.N.V. Kurup won the laurel. Akkitham won the 55th edition of the Jnanpith.