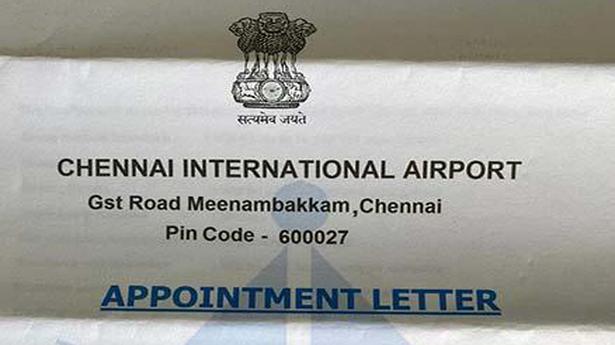 After Gandhimathi (name changed) from southern Tamil Nadu received an SMS last month offering jobs in the Airports Authority of India, she responded by calling the mobile number mentioned in the message, registered under the name of HR, Aero, in the Truecaller app.

What unfolded in the next three days exposed a gang of job racketeers who targeted gullible youth offering them ‘employment letters’ in the names of organisations like the AAI. The woman ended up paying ₹2,500 via Google Pay as application fee, and got posted as a “ground staff” at Madurai airport within two days.

She grew suspicious when the “recruiters” insisted on a payment of ₹28,000 as caution deposit for training equipment like walkie-talkie systems and uniforms. Ms. Gandhimathi realised that she had been duped after a friend informed her that job offers like those were not made without personal interviews.

The police said many unemployed youth were being cheated by job racketeers based in Tamil Nadu, other States and even abroad. Since the suspects sent mails/offer letters indistinguishable from the genuine ones, the victims made payments. Such scams were on the rise at a time when thousands of people have lost jobs due to the pandemic.

“These gangs target such gullible youth and lure them with lucrative job offers in Central government organisations,” a police officer said.

“We have directed the Commissioners/Superintendents of Police to take firm action on complaints of job racketeering. It will be easy to zero-in on the suspects based on digital footprints. In some cases, the gangs operate from fake addresses using SIM cards activated with forged documents. But there is no let-up in our endeavour to track them down,” Director-General of Police J.K. Tripathy said on Friday.

In Chennai, Commissioner of Police Mahesh Kumar Aggarwal said cyber crime units had been decentralised to the police station level. “In the last two months, we have recovered ₹30 lakh lost by complainants in different types of cyber frauds, including job racketeering,” he said.

A couple of days ago, Mr. Aggarwal received a complaint from Ranjith Kumar, 31, of Kaatankulathur, via video call, regarding a fake firm Sailors Maritime Academy, headed by one Mohandoss.

A special team nabbed Mohandoss, his wife Rani, and associates Karthick, Mohanraj and Parthiban, who were involved in the racket. “Investigation revealed that the accused had cheated over 100 persons of nearly ₹30 lakh. Legal action is being pursued against them,” the Commissioner said.

The AAI and many other Central government organisations have issued alerts to the public not to fall for fake job offers.

“It has come to our notice that some unscrupulous agencies/persons are fraudulently offering false employment opportunities in the Airports Authority of India by using the logo of AAI. These bogus agencies have been conducting telephonic interviews and receiving money from candidates as a caution deposit by making false promises of securing job…,” the AAI had warned even last year.

It had pointed out then that all vacancies and recruitment would be notified on its official website and also in the Employment News/Rojgar Samachar and leading Indian newspapers.