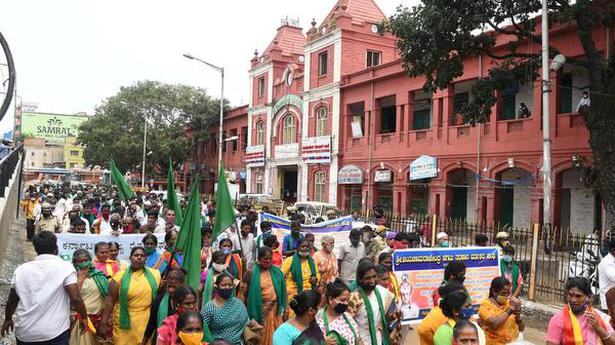 K.R. Market and the adjoining Kalasipalyam market will reopen for business on September 1. The announcement on Monday by the Bruhat Bengaluru Mahanagara Palike (BBMP) came on a day which saw a delegation of farmers and traders taking out a protest march demanding their reopening.

Civic Commissioner N. Manjunath Prasad assured the delegation that the markets will reopen in September. The markets have mostly been closed since March 24 when the lockdown was imposed in the State due to COVID-19. Though the markets opened for nearly two weeks in June, they were shut down after several COVID-19 cases were reported.

“We will take all precautionary measures and reopen the markets. I have asked officials to carry out a sanitisation exercise in the next two days. We will also mark spots for customers to stand in queues following social distancing. We will deploy marshals to enforce social distancing and other safety measures, like wearing masks and using sanitisers,” Mr. Prasad told The Hindu.

Kodihalli Chandrashekhar, president, Karnataka Rajya Raita Sangha, who led the protest on Monday, said the closure of K.R. Market and Kalasipalyam market had adversely impacted farmers from around the city growing vegetables and fruits.

“They are not getting a competitive price for their produce. The government has shifted the market to Huskur Gate, beyond Electronics City, to where most farmers are not going, due to the additional transport cost involved. In the absence of an organised market, farmers are unable to get good prices,” he said.

The traders at these markets are also an aggrieved lot. R.V. Gopi, president, Kalasipalyam Vegetables and Fruits Wholesale Traders Association, said though the State government provided an alternative venue at Huskur Gate, there is no infrastructure at the site.

“The site is an open field, which has become muddy. It is not possible to do business after a rain. Moreover, the shifting of the market did not protect us from COVID-19. Seven of those working in the market, including traders died of COVID-19. While all businesses are being opened up, we are also asking for the market to be opened up with all precautions,” he said.

It has been nearly two weeks since the wholesale market hub in the Old Pete, that was shut down along with K.R. Market, has fully reopened without any restrictions. However, the traders rue the lack of business, especially the washout of the festival and marriage season, when they used to make the most business.

“The entire festival and marriage season is washed out this year. We were mostly shut down during the Varamahalakshmi festival. Though we were open for the Ganesha festival, business was as low as 20%. There are no marriages as well. While many have postponed marriages, some who are going ahead are not giving us good business as there are restrictions on how many people can congregate for the ceremony,” said Dungar Mal Chopra, president, Karnataka Hosiery and Garment Association.

Another merchant and trade activist Sajjan Raj Mehta said though the Union government has said we will have to learn to live with the corona virus, the unlocking was not complete. “The business will resume only after normalcy returns. The government needs to restart metro and bus services to its full capacity,” he said.