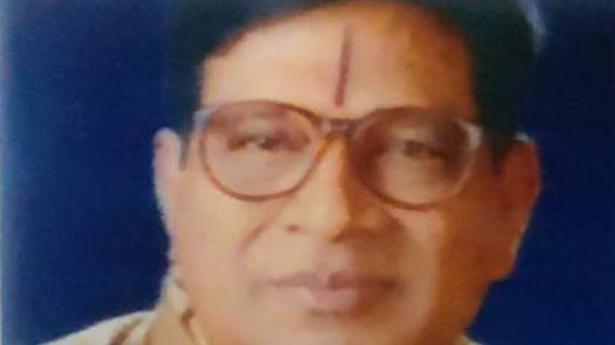 Kamisetty Srinivasulu (79), who served as the founder Director of the Annamacharya Project, one of the prestigious propagation arms of the Tirumala Tirupati Devasthanams (TTD), passed away while undergoing treatment for an illness at Hyderabad on Saturday. He was a renowned writer, orator, composer and commentator during his stint.

Born in 1941 in Kadapa, he pursued postgraduation in Telugu at Sri Venkateswara University and also did a PG diploma in linguistics. As a direct disciple of scholar Rallapalli Anantakrishna Sarma, he got wide exposure in spiritual, religious and scholarly subjects and joined the TTD in 1964. When the TTD instituted the Annamacharya Project, he was made its Director in 1978. He was instrumental in instituting Annamacharya chair at SVU that helped young scholars take up research on the saint poet.

Mr. Srinivasulu became a household name in the eighties, as his unique voice, command over chaste Telugu, his art of modulation and diction were easily identifiable. When the project brought out audio cassettes on Annamacharya’s compositions, his commentary almost became indispensable at the beginning of every song. The then Chief Minister the late N.T. Rama Rao had even appreciated him for his ‘golden voice’ on the stage of a function.