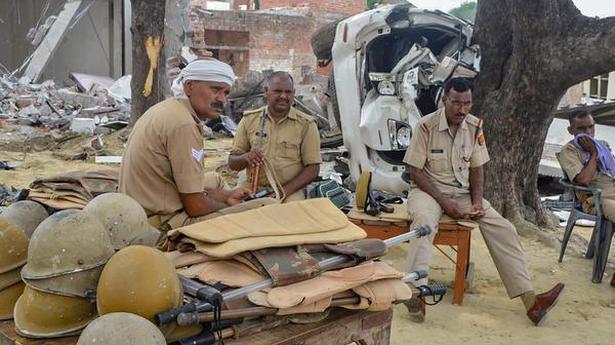 A senior IPS officer in Uttar Pradesh on Tuesday demanded a “high-level and immediate” probe into the alleged report against the Chaubeypur SHO submitted to the then district police chief by Circle Officer Devendra Mishra, who was killed last week.

The demand came after the present Kanpur SSP Dinesh Kumar said the file of the alleged report was not found despite searches at the offices of the SSP, CO Bilhaur and SP Rural.

The CO, who was among eight policemen killed in an attack on a police team in Kanpur’s Bikru village on July 2, had in March allegedly alerted the district police chief that the SHO of Chaubeypur Vinay Tiwari had been protecting the main accused Vikas Dubey.

In his report, which surfaced on Monday, Mishra had written to then SSP Kanpur Anant Deo Tiwari on March 14 and accused Vinay Tiwari of being sympathetic to Dubey and displaying a “doubtful integrity” by not taking action against the criminal.

IG, Joint Director Civil Defence, in Lucknow, Amitabh Thakur has written to DGP U.P. H.C Awasthi demanding a probe into the complaint. Mr. Thakur said the probe was needed to the look into the “nexus between criminals and the policemen”, adding that the then SSP, now posted as a DIG in Lucknow, did not take action against SHO Tiwari and “deliberately overlooked it [the complaint]”.

The matter had become “even more suspicious” after it emerged that the letter by the CO was not found among the files in the SSP Kanpur’s office.

SSP Kanpur Dinesh Kumar said the files were not found nor was there any mention of the letter anywhere. Also, he said, there was no report against the SHO received on March 14. However, the officer said, “We are investigating the matter more deeply,” and promised action if the file was found.

ADG Law and Order Prashant Kumar said given the “gravity of the matter”, IG Lucknow would probe the matter to bring out the truth. An audio clip purportedly of a conversation of the CO, SHO and then SSP would also be probed.

Meanwhile, the police arrested three more persons for allegedly helping Dubey during the Bikru attack. The police are already investigating the role of policemen who allegedly tipped off the criminal about the police raid.

According to officials, 40 police teams and the STF are trying to nab Dubey and his men. The search has spread to West U.P. and the Delhi Police Special Cell has also been alerted, in case Dubey tries to sneak into the capital through Delhi-NCR border.

Since Monday, posters carrying his photo are being put on all the toll plazas in the region. Senior officials, who have served in Kanpur and neighbouring districts and are now posted in west U.P., are helping their counterparts by providing them inputs on Dubey.

A senior official, who has served in Kanpur, said Dubey could have escaped to Uttarkhand. “One of his mobile numbers has been apparently traced to Madhya Pradesh. So the police are not discounting the probability of his presence there as well,” he said, requesting anonymity.

On Monday, there were reports that Dubey and his aides were spotted in Haldaur police station area of Bijnor in two SUVs. “Immediately, we pressed multiple teams across the districts. Vehicles were checked but it turned out to be rumour,” said Sanjay Kumar, Superintendent of Police (Rural). He said every police post in Bijnor has a photograph of Dubey and policemen of six police station are manning the border with Uttarakhand.

Similar urgency was seen not only in neighbouring districts such as Meerut, Muzaffarnagar, Amroha and Saharanpur but also in Agra, which is around 350 kms away. Armed policemen in bulletproof jackets could be seen checking vehicles at the toll plazas.

Avinash Pandey, Superintendent of Police (Rural), Meerut, said they were working on specific inputs and could not reveal them. Vineet Bhatnagar, SP Shamli said, patrolling and checking has been increased at the Haryana border.

Another police official, requesting anonymity said it was perhaps the first time that the photos of a fugitive are being pasted in such large numbers at various spots. “Earlier, it was limited to the walls of the police station,” he said. “Perhaps, it is an attempt to give an impression to the public that we are in pursuit of Dubey,” he added.

(With inputs from Anuj Kumar)