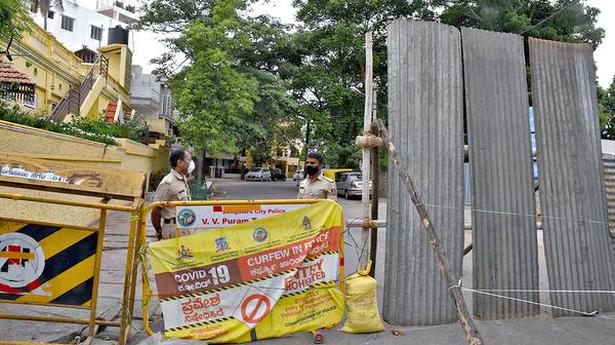 Karnataka on Friday recorded a whopping 515 cases on a single day, 482 of which are inter-State travellers. As many as 474 of them had returned from Maharashtra. This single-day spike indicates the galloping rate of the spread, given that the first 500 cases in the State had been reported 48 days after the very first case was detected on March 9.

With the Friday’s figures, the total number of positive cases in the State shot up to 4,835. They include 57 COVID-19 deaths, two non-COVID deaths, and 1,688 discharges. Of the 83 people discharged on Friday, the highest recoveries — 32 — are from Hassan.

The number of active cases crossed 3,000 on Friday which is 63.86% of the total cases now. Friday’s numbers also pushed Karnataka to the 10th position in the country from 12th.

With this, Udupi now has the highest number of cases in the State. While a total of 768 cases have been reported from this district so far, it has 685 active cases now.

Yadgiri follows Udupi with 74 cases, all of whom except one are returnees from Maharashtra. Although thousands of samples from this district are still under the process of being tested, it has been reporting less than 10 cases in the last three days. On May 31, 44 cases were reported from this district.

Raichur — which had reported 88 cases on Thursday, 76 of whom had been infected by five Maharashtra returnees — did not see any positive case on Friday.