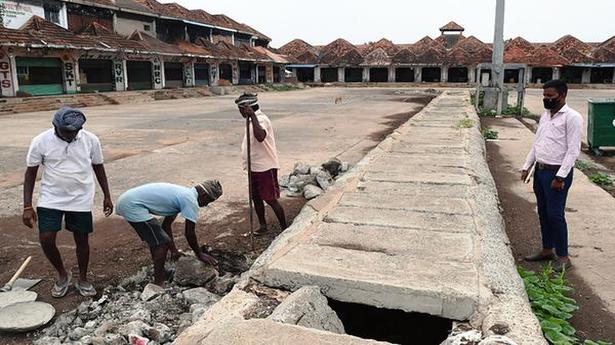 Stormwater drain network will be desilted and reconstructed; work to be finished in a month


Work is in progress to improve infrastructure at the Koyambedu Wholesale Market Complex, which has been closed down since May.

For a few days, the otherwise empty premises of the market have been bustling with activity. Labourers have been employed to repair stormwater drains in and around the complex, particularly the one on E Road where the omnibus terminus is located.

Officials of the Koyambedu Market Management Committee said work was under way to repair and reconstruct portions of the market compound wall for a distance of nearly 1.5 km. Some long-pending repairs were also being carried out.

“We are also repairing the roads leading to the market. Ones like B road, linking Poonamallee High Road with the market, were damaged while providing utility lines,” an official said.

The damaged portion of the stormwater drains on E Road, which often led to waterlogging, is also being desilted and reconstructed. Besides painting work, plans to fix electrical issues and lighting inside the market were also on the anvil, he said.

“Additional drinking facilities will be provided with Metrowater’s help. We are planning to renovate the 68 toilet blocks as well. Work will be completed in a month,” the official added.

On the other hand, the food grains wholesale merchants of Koyambedu have complained that stock worth several lakhs had gone waste due to the market’s closure for three months.

P. Pandiarajan, of the Koyambedu Food Grains Market General Traders Association, said food grains and pulses worth ₹5-₹6 lakh had been wasted in each shop. Of the 500 shops, nearly 240 shops were operating while the rest remained shut due to various reasons. While a few traders returned to Anna Pillai Street and George Town, many who rented out shops in Koyambedu had been affected, he said.

Unlike the vegetables, fruits and flowers market, the food grains market cannot operate out of a temporary space since goods cannot be left without safety, he said. “We stocked expensive goods like cashews, raisins and cardamom that have now gone waste. The State government must allow us to reopen shops with safety norms,” Mr. Pandiarajan added.