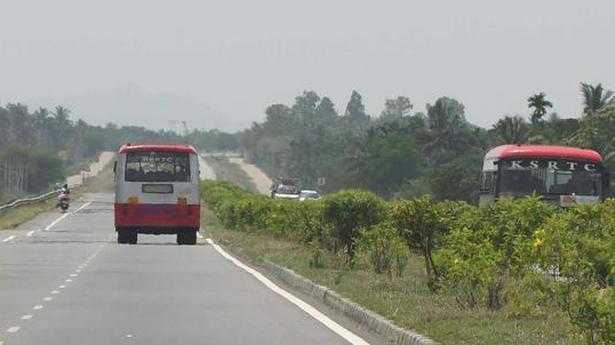 The Karnataka State Road Transport Corporation (KSRTC), which had stopped inter-State services on March 22, is hoping to resume services to some of the neighbouring States. It has requested the State government to take up the matter with its counterparts in Goa, Kerala, Andhra Pradesh and Telangana, and get the required permission.

However, due to the high prevalence of COVID-19 cases in Maharashtra and Tamil Nadu, the corporation is not keen on resumption of services to these two States, said sources.

“KSRTC is the first State-run road transport corporation in the southern part of the country to come out with a proposal to resume inter-State services. Three days ago, we approached the State government requesting to take up the matter with the four neighbouring States. We are hopeful of getting consent from the Andhra Pradesh and Telangana governments. Approval from Goa and Kerala may take some time,” said a KSRTC official.

Prior to the lockdown, the Corporation operated 1,070 services, including its luxury fleet of Airavat Club Class, Ambari Dream Class and Fly Buses that connects to Kempegowda International Airport. Inter-State services are one of its major sources of revenue, but like most sectors and services, KSRTC, too, has suffered huge losses over the last two months.

“Due to the lockdown, the Corporation is losing ₹1 crore per day due to non-operation of inter-State services,” the official added.

“If we are allowed to run buses, we may start with 10-15% of services, and gradually increase them depending on patronage. We have to maintain social distancing and other norms while operating the services,” an official said.

Over 2 lakh passengers per day

When it first resumed within Karnataka on May 19, KSRTC was running just 5% of its regular bus services. In a little over a fortnight, this has increased to 32%.

“In the coming days, the number of passengers will increase further. We will run buses as per demand. We have also approached the government seeking permission to run AC buses within the State,” an official said.

The KSRTC has a fleet of 500-odd premier AC buses.