China’s moves into the Galwan Valley, Pangong Lake area and several other spots along the Line of Actual Control (LAC), starting in early May, were likely planned for months and followed a new mobilisation order issued by President Xi Jinping, according to the assessments of Indian officials.

Several Chinese incursions across the LAC took place almost simultaneously in locations several hundred kilometres apart — some even hours apart on the same day — leading to skirmishes in early and mid-May.

The timing of the incidents suggested a high level of coordination and planning, the officials said.

In Galwan Valley and Pangong Lake, the People’s Liberation Army’s (PLA) deployments appeared to have been aimed at pushing India back from the LAC and redrawing it to more closely align with China’s official borders.

A buffer zone that both sides have temporarily agreed to in Galwan has, on China’s insistence, been structured around Beijing’s new LAC perception, shifting the line around 1 km west.

In Pangong Lake, China has thinned its presence from its LAC perception at Finger 4 but moved only to Finger 5, still much deeper inside from the Indian claim line at Finger 8 which is about 8 km from Finger 4.

Starting in late January and early February, the PLA began what was viewed as routine mobilisation for annual exercises in Xinjiang, which borders Ladakh.


This year, however, in a major departure from the earlier annual exercises, PLA troops that used to train far inside their territory, while border frontier troops remained in forward areas, for the first time moved close to the border. Due to this, there was huge mobilisation since April and the move was very evident, officials stated.

In January 2020, President Xi signed a new Training Mobilisation Order (TMO) for strengthening military training in real combat conditions and “to maintain a high level of readiness”. The new order updated the 2019 TMO, which was the first such order to be signed by Mr. Xi, and had called for implementing new military training guidelines announced by him in 2018 to improve combat readiness.

While the announcement was seen as routine at the time, Indian officials believe it dramatically altered the pattern of annual exercises and China’s forward deployments, not just with India but also in other theatres, where tensions have flared this summer with Japan, Taiwan and in the South China Sea. Government sources said the TMO called for “confrontational training” to assess the reaction of commanders in real-time combat situations and deal with “a multi-front situation”.

“They are putting these to test and are war-gaming in real-time,” said one government source, who like others quoted in this article requested anonymity.

With the TMO likely to be in place till at least 2021, India is preparing for a new normal along the border, and is considering the possibility of positioning an additional division under its Leh-based 14 Corps, which sources said was likely to happen.

The Galwan and Pangong flash-points

The PLA’s mobilisations began in January after the order was signed, a government source said, and was initially focused on the more than 200 km-long axis stretching from Galwan Valley to Pangong Lake. On the night of May 5, skirmishes or confrontations simultaneously took place in the Galwan Valley and on the north bank of Pangong Lake, as has been confirmed in Indian and Chinese official statements. 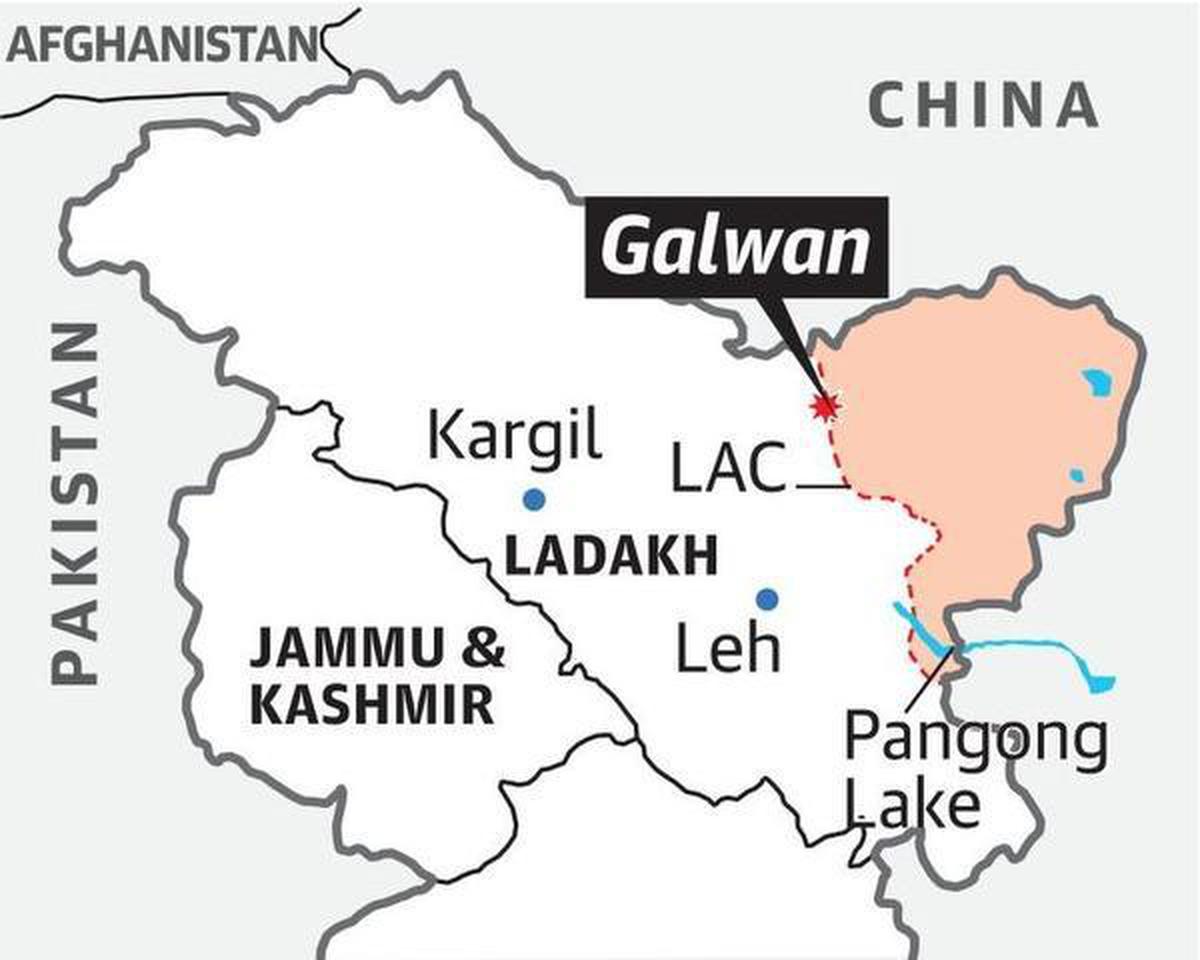 China has blamed the tensions in Galwan Valley, which culminated in a clash on June 15 that claimed the lives of 20 Indian soldiers and an unknown number of Chinese soldiers, on India’s construction activities transgressing the LAC. The LAC along the India-China border has never been demarcated. In Ladakh, it broadly aligns with China’s perceived border, while in Arunachal Pradesh it broadly aligns with India’s perceived border. There are around 11 spots in Ladakh where there are differing perceptions of the LAC.

There are also areas where the LAC differs from China’s claimed border, and the Galwan Valley is one of them. While China’s official maps show the border passing through the bend in the Galwan river where it turns sharply to meet the Shyok river, known as the Y-nallah, the LAC lies around 1 km east of it. India has been routinely patrolling up to Patrolling Point 14, which is a few hundred metres east of the bend, and was the site of the June 15 clash, which took place around 1 km inside India.

The LAC is broadly in alignment with the coordinates China provided India in 1960 regarding its territorial claims in Galwan, although Chinese maps now show its border further west, at the bend, which China calls the ‘estuary’. Since May, China has referred to the LAC as running at the estuary in line with its territorial claims, which India has said was an “exaggerated and untenable” claim.

Also read | Lesson from Doklam: No de-escalation until full return of status quo

Starting in late April, China began objecting to India crossing the Y-nallah and reaching PP14. On July 7, Chinese State media released images, thought to be from early May, purporting to show Indian troops carrying out construction, such as foot bridges across the narrow river, in the area that falls in between the Y-nallah and the LAC. The images have not been authenticated.

In a statement on June 19, the Chinese government accused Indian troops of “crossing the LAC” on the night of May 5 and said Chinese troops “have been forced to take necessary measures to respond to the situation on the ground and strengthen management and control in the border areas”. According to Indian officials, China had never previously patrolled up to the Y-nallah bend.

On the same night of May 5, another skirmish unfolded more than 200 km away near Finger 4 on the north bank of Pangong Lake. Here, the difference in perception of the LAC was mutually recognised. China’s maps claim up to Finger 4, while India has been patrolling up to Finger 8. The Fingers 1-8 refer to mountain spurs running from west to east, towards the lake. China has previously dominated up to Finger 4 and built a road there in 1999, while the terrain means India can only patrol on foot from Finger 3 to 4. Since May, China has objected to India crossing Finger 4 and built a road to the top of the spur, occupying the ridgeline.

Throughout May, there were simultaneous Chinese deployments at other areas along the LAC as well as a build up of Chinese forces in depth areas.

A week after the Galwan and Pangong skirmishes, the PLA bolstered deployments both in the far north, from Dahongliutan near the Xinjiang-Tibet border starting May 12, and in the eastern sector of the India-China border near Naku La in North Sikkim from May 13, where a skirmish took place on May 9. Chinese troops also made ingresses at Pangong Tso, Galwan Valley, Hot Springs and Gogra and built up at Chip Chap, Spanggur gap and Changlung La. The rear areas were all occupied by mid June, officials said.

With the disengagements currently under way, the concern in Delhi is the PLA’s strategy might be a “many steps forward and a few steps back” approach. With the new PLA training module in place until 2021, officials believe this summer’s events may not be the last.