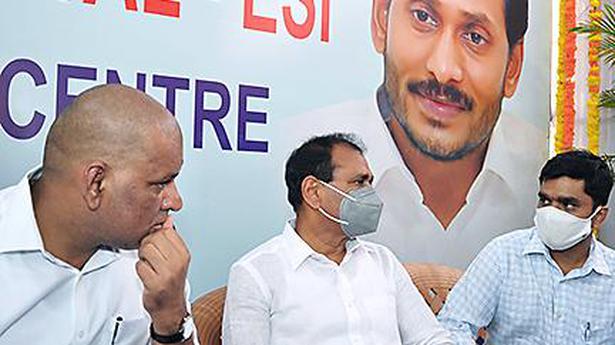 Tirupati MLA and Chittoor district COVID coordinating committee chairman Bhumana Karunakar Reddy has cautioned the public to stay indoors and practice physical distancing, recalling that the number of cases has been on a steady rise in the district in the recent days.

“From 2-3% in the initial days to 6% last month and from 17% during the last fortnight, the positivity rate has steadily risen to 20-25% in the last two days,” he observed. The official, along with co-chairman Ch. Bhaskar Reddy and Collector Bharat Narayana Gupta, participated in the opening of a COVID reception counter at the ESI Hospital here on Friday.

The counter was opened to disseminate information among the kin of COVID patients about their health status, admission and discharge details.

In spite of the sincere efforts by the district machinery to prevent the spread, lack of seriousness among public had caused the spike, Mr. Reddy observed. “The doctors and sanitary workers are leaving no stone unturned, but it is the civic indifference that is taking a toll, he said.

Dr. Bhaskar Reddy said the counter was necessitated by the series of complaints from the relatives about lack of transparency in divulging details about the health status of patients. He appealed to the public to stay safe, citing IMA and WHO statements on the crucial turn the curve could take in the next 45 days. They later inspected Govindaraja choultry, which is set to become the next COVID Care Centre. Joint Collector K. Veerabrahmam, TUDA Vice-Chairman S. Harikrishna, Secretary S. Lakshmi and ESI Superintendent Balasankar Reddy accompanied them.

Kodagu, parts of SK see no respite from rain

As many more travel by trains, railways to conduct fresh head...