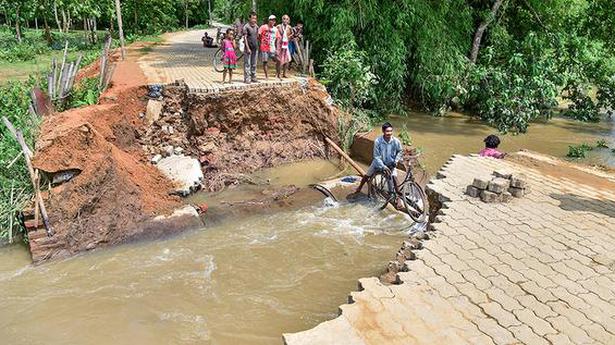 Landslip killed three persons in Arunachal Pradesh, while a man was feared drowned in Meghalaya, as large swathes of the northeastern India experienced heavy rain. Assam is the worst affected State, with 1.95 lakh people displaced in seven districts.

Arunachal Pradesh Chief Minister Pema Khandu on Tuesday grieved the death of three persons of a family at Arzoo village in Dibang Valley district. Incessant rain since May 23 triggered the landslip that buried a 27-year-old woman and her two minor children alive.

“We have asked the district administration and the State Disaster Management Department to continuously monitor the situation. Natural disaster has added to our fight against the COVID-19 pandemic,” he said. Several low-level areas were flooded.

The government announced ₹4 lakh in immediate relief to the survivors of the three killed.

In the Mendal area of Meghalaya’s North Garo Hills district, a man was swept away as he attempted to cross River Didram on Sunday. Officials said search operations were hampered by the torrential rain.

Rainstorms since Sunday night have caused widespread damage in three other districts of Meghalaya. The worst affected was Mawkyrwat block in South West Khasi Hills district where landslips destroyed 22 houses. “Besides, the storms blew away the roofs of many houses. The water level of rivers and streams has been rising too,” block development officer F.B. Basan said.

In Assam, the number of flood-affected people increased by 1.64 lakh in less than 24 hours to 1,94,916 across seven districts. Nalbari and Tinsukia were added to the list of five districts inundated on Monday — Darrang, Dhemaji, Dibrugarh, Goalpara and Lakhimpur.

The bulk of the affected people, numbering 1.68 lakh, are in Goalpara where 8,941 people have moved to relief camps that officials said were opened following the COVID-19 protocols. Nalbari has 10,943 affected people.

“Floodwaters have so far affected 229 villages and crops on 1,007 hectares across the seven districts, mostly in Dhemaji, Lakhimpur and Dibrugarh districts. We have so far provided 272.24 quintals of rice, pulses and salt, besides 8.4.69 litres of cooking oil,” a spokesperson of the Assam State Disaster Management Authority said. More than 111 quintals of cattle feed has also been provided for 13,458 domestic animals affected by the floods, she said.