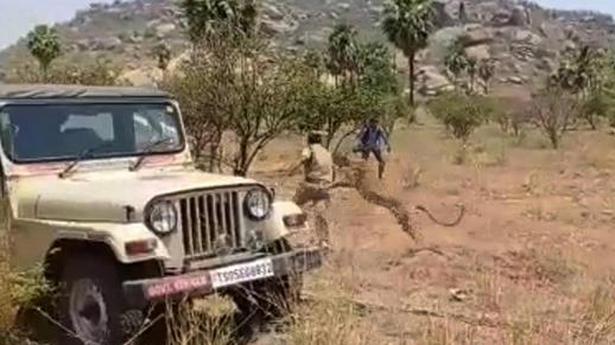 A panicked leopard attacked two forest officials on Thursday during a rescue operation on the outskirts of Rajapet thanda in Telangana’s Nalgonda district.

Though the seven-year-old male leopard was eventually tranquillised and shifted to Hyderabad, it died on the way to the treatment facility at the Nehru Zoological Park (NZP).

Locals said the leopard was found trapped in a barbed wire fence around 6.30 a.m. The police and forest officials arrived within an hour. “The leopard had preyed on a sheep and its hind legs were trapped in the fence when it tried to wriggle out,” owner of the farm land, K. Suresh Naik said.

Tense moments unfolded after the rescue team got down to work around 11 a.m. A huge crowd had gathered to witness the rescue. The team first fired three shots from the tranquilliser gun, but the frightened leopard extricated itself from the trap and ran amok. When the officials chased it with sticks, the big cat pounced on an official and mauled another person.

The injured duo, forest beat officer Osman and NZP official Shiva, are stable and out of danger.

The leopard then scurried under the forest vehicle, when it was finally shot at twice. It was soon dragged into an enclosure and shifted to Hyderabad, but died on its way to the NZP.

Veterinarians who conducted the post-mortem said the animal died due to “internal haemorrhage, shock and asphyxia”.

“It is sad that the entire operation was conducted in an utterly unscientific manner. They dragged the animal by tail, and then by legs into the cage. How can an animal rescue ambulance go without a stretcher?” asked a renowned wildlife expert who did not wish to be named.

Charles Corfield, a retired forest officer from Tamil Nadu, who had participated in several rescue operations, questioned the attempts to tranquillise the leopard amid the cacophony of onlookers.

“Tranquillising is nothing but inducing sleep. Will anybody be able to sleep amid such noise? Unfortunately, this is the scenario everywhere. Police do not allot enough staff to control the crowds,” Mr. Corfield says.

“Everywhere in the country they drag the animal than carrying. They get so much funding under Project Tiger. Can’t they spend some on stretchers?” he asked.