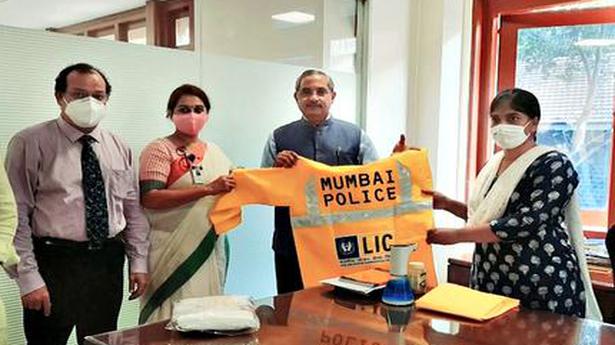 The Life Insurance Corporation of India (LIC), Western Zone, has contributed 1,000 raincoats to the Mumbai Police to support its personnel who are fighting on the frontline against the COVID-19 pandemic.

The raincoats were handed over by C. Vikas Rao, zonal manager, Western Zone, LIC, to the Deputy Commissioner of Police (Administration), Crawford Market, at a ceremony last week. The gesture was a token of appreciation for the services being rendered by the Mumbai Police.

At the function, Mr. Rao thanked the personnel for their unswerving devotion to duty and said the LIC was proud that 35,643 policies of the Mumbai Police are being serviced by the LIC’s Western Zone. The LIC has in the past been associated with the Mumbai Police. It has donated a police shelter booth at Gateway of India and contributed to setting up traffic barricades.

The Mumbai Police have been at the forefront in the city’s fight against COVID-19. Most of the 259 fatalities owing to the virus among the police force in Maharashtra have been reported from Mumbai. More than 20,000 police personnel in the State have tested positive for the virus.