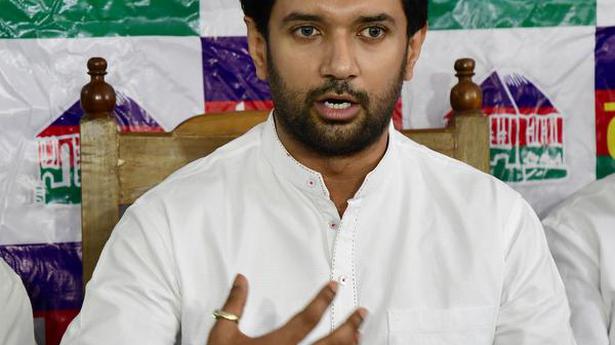 The Lok Janshakti Party (LJP) may withdraw its support to the Nitish Kumar-led government in Bihar, its sources said on August 14 after the party accused senior JD(U) leader Lalan Singh of “insulting” Prime Minister Narendra Modi.

LJP chief Chirag Paswan met BJP president J.P. Nadda on August 13 and discussed the matter among other issues, they said.

Mr. Paswan has called a meeting of party leaders at party’s Patna office on August 15 over the issue, they said.

Mr. Lalan Singh had recently taken a swipe at Mr. Paswan, saying that like Kalidas he was cutting the branch of a tree on which he was sitting.

The LJP has said Mr. Singh’s dig was aimed at a tweet of Mr. Paswan in which the party president had lauded Mr. Modi for his call to several Chief Ministers, including Mr. Kumar, to ramp up COVID-19 tests.

“Lalan Singh has insulted the Prime Minister. We may withdraw our support from the Nitish Kumar government,” a LJP leader said.

The LJP has two MLAs in the 243-member Bihar Assembly.

Even if it withdraws the support, it will make no material difference to the government but the development highlights worsening of the ties between the two BJP allies in the State.

MeitY in process of amending IT rules for intermediaries to make them more accountable: Sanjay Dhotre