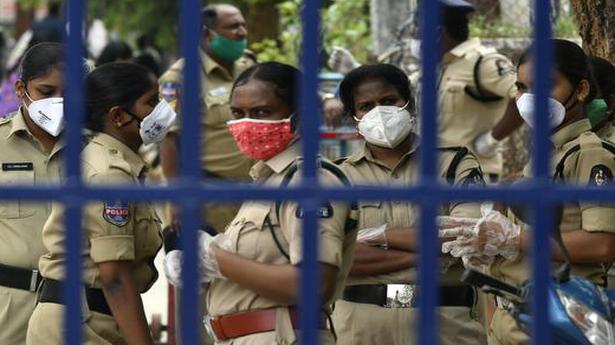 Chief Minister K. Chandrasekhar Rao has said the State government will take a final call in three to four days on proposals to reimpose lockdown in the limits of Greater Hyderabad Municipal Corporation to check the spread of coronavirus.

The government will closely monitor the situation for two to three days and, immediately thereafter, convene a meeting of the Cabinet, if needed, to discuss proposals to reimpose lockdown in GHMC limits or other alternatives to tide over the crisis, Mr. Rao told a high level meeting on Sunday that went into the steep rise in coronavirus cases in the city.

Mr. Rao, however, warned that reimposition of lockdown was going to be a big decision, which required gearing up the public and government machinery, particularly the police. It will also require Cabinet taking a look and gathering opinion of all sections of people.

He referred to proposals by Health Department to reimpose lockdown in Hyderabad for a period of 15 days. The same was done in Chennai while several other cities in the country also considered following suit.

“With a population of one crore, it was natural for Hyderabad to go the way of other cities in view of the wide spread of virus across the country. The spread was due to movement of people after lifting of the earlier phase of lockdown,” a release quoting the Chief Minister said.

The meeting on Sunday was held solely to discuss the steps taken to check the spread of coronavirus, treatment extended to positive patients and future strategies. The situation in Hyderabad was discussed in detail.

Health Minister Eatala Rajender brought to the Chief Minister’s notice the request of health officials and experts to reimpose lockdown in Hyderabad for 15 days to contain the spread.

Another press release issued later said Mr. Rao was credited with the view that several factors will have to be considered to impose the lockdown totally and effectively. A day-long curfew with one or two hours of relaxation for buying provisions will have to be planned.

Air and train services must be suspended and the government must make all arrangements. Therefore, the government will take appropriate decision after examining all aspects in depth, Mr. Rao said.

Mr. Rajender said Telangana was no exception to the fast spread of coronavirus in the country. However, the mortality rate in the State was less than the national average. There was no need for alarm as treatment was given to everyone who tested positive and thousands of beds were kept ready to admit patients in government and private hospitals, he added. Serious patients were admitted to hospitals while asymptomatic persons were treated at home.

The latest report of Principal Health Secretary A. Santhi Kumari was perused on the occasion. It said the mortality rate in the State was 1.52% while it was 3.04% at the national level.

In his response, the Chief Minister allayed all fears about the threat from virus merely because the State recorded high positive cases on a daily basis.

England hope bubble cricket can be blueprint for world game |...

US open golf: Justin Thomas grabs US Open lead while...