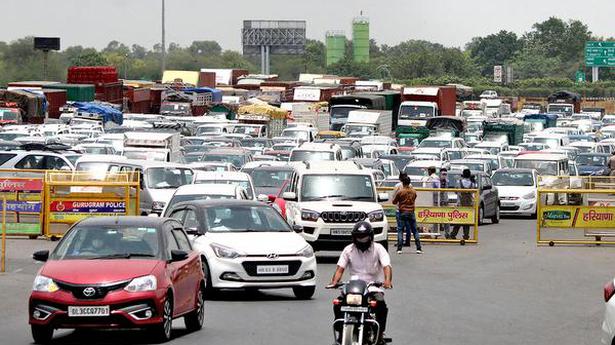 Anil Hada, a Wazirabad-based cab operator, owns 27 taxis and has been in the business for almost two decades. Hit hard by the lockdown, he is now planning to switch trade and open a grocery store.

Mr. Hada, in his 40s, said his business has been on a decline since 2014 when cab-aggregators such as Ola and Uber entered the market. He mostly hires out taxis to automobile firms in Manesar. Even before the lockdown, he lost almost half his business due to the economic slowdown.

He claimed to have received just five bookings over the past two months. The earnings have not been enough to meet expenses such as loan instalments on ten taxis, amounting to ₹3.5 lakh per month, and salaries of drivers.

“My business involves the risk of accidents, fear of challans and police action. It is not worth it anymore. I see my father running a grocery shop. He leads a relaxed life. I too will open a grocery shop if the situation persists,” said Mr. Hada.

He brought his son into his business a few years back but now regrets it.

Mr. Hada recalled the good old days of the business when loan instalments and salaries of drivers were low, and bookings were in abundance. Over time, expenses have gone up even as bookings have dipped.

Apart from automobile firms, he gets bookings for routes where Ola and Uber do not ply.

Mr. Hada has availed the loan moratorium scheme, now extended for another three months, but doubts that he will be able to pay back the money even six months after the lockdown is lifted. “After the moratorium period, I need to pay a huge interest along with the instalments. It would have been better had the government increased the loan tenure and not imposed the interest,” said Mr. Hada.

Jagbir Singh Yadav of Konasth Travels Private Limited too has been struggling to remain afloat. Having a fleet of around 500 taxis, Mr. Yadav caters to IT firms, BPOs and airlines ferrying their employees. But with the shutting down of offices due to the lockdown, he is totally out of work.

Mr. Yadav said a couple of his client companies had called him to inform that they might not need transportation for another one year and wanted to terminate the agreements.

“It is a wait-and-watch situation. Nothing much can be done. It is difficult to even switch to new business in these times,” he said.

Mr. Yadav has been partially paying salaries to his drivers but said that he will not be able to keep it up if the situation persists.

With monthly loan instalments of around ₹15 lakh-₹20 lakh, he has availed the moratorium, but that too is a costly option to exercise with huge interest on the deferred EMIs.

Mr. Yadav said that most of his vehicles were on loan with instalments ranging between ₹17,000 and ₹26,000 per month.

The company has 500 drivers, meaning around 2,500 people have been affected. The only solution is to “learn to live with the situation”; no one can afford to sit at home for long, said Mr. Yadav. “It is a turbulent time for the transport and hospitality industries. The government has not announced any package for us,” he rued, adding that a lot of uncertainty prevailed as the companies were allowed to open but the borders were sealed.

Running a bus tours and travels agency, Satbir too has been hit hard by the lockdown. He mostly catered to companies in Manesar ferrying their employees, but there has been no business for almost two months now.

“A couple of buses have gone back to work, but with the industries not running at full capacity, the demand is very low. Now, it is all at the mercy of the Almighty,” said Mr. Satbir. He had been running a few buses to cater to foreign and domestic tourists as well, but tourism has completely stopped.

“It may take several months, if not years, for the tourists to return,” lamented Mr. Satbir, who runs Bright Tours and Travels from Sector 12.

Amid the lockdown, the cab operators have also been hit by a flurry of e-challans for speeding by Delhi Police.

Mr. Hada claimed he had received as many as 270 challans worth ₹5.70 lakh in April for speeding of his cabs from November 2019 till March this year. “Since most of the drivers have now left, I need to pay these on my own. It has been an additional financial burden when the income is nil. Many operators have received these challans worth lakhs,” said Mr. Hada.

Mr. Satbir too said he had received challans for speeding of the buses plying to neighbouring States.

Not just the big cab and bus operators, independent cab drivers too are struggling to survive.

Brijender, who is attached to Ola, said he had returned to work in the first week of May after the “Janata Curfew” on March 24.

Mr. Yadav said that the independent drivers attached to his company were hit even harder since they could not afford to pay the EMIs for the vehicle loan.