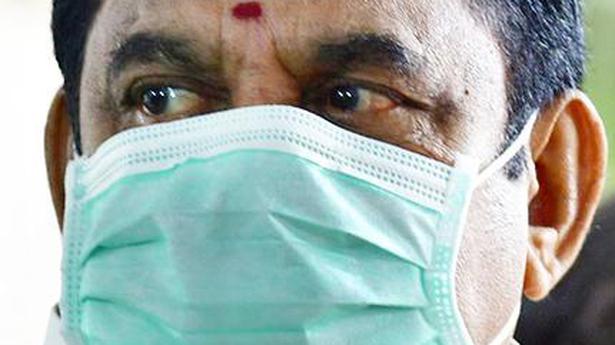 The Tamil Nadu government on Tuesday extended the COVID-19 lockdown across the State till October 31, but offered a few relaxations. Last month, it had extended the curbs till September 30.

In a statement, Chief Minister Edappadi K. Palaniswami said restaurants and tea shops would remain open between 6 a.m. and 9 p.m. Takeaway services would be permitted till 10 p.m. Essentially, this means an extension in operational timings by an hour each for dine-in and parcel services. He also announced that shootings for cinema could be carried out with 100 persons on set, but spectators were not to be allowed.

“The State government announced major relaxations during September and, at the same time, the spread of the infection has decreased at the State level. Steps are being taken to further decrease the [case] mortality rate,” Mr. Palaniswami said.

The announcement followed his video conference with District Collectors and his meeting with medical and public health experts at the Secretariat on Tuesday.

While he announced that 50 more flights from other States would be allowed to land in Chennai per day, there was no such relaxation for Coimbatore, Tiruchi, Madurai, Thoothukudi and Salem airports.

The prohibitory orders against the gathering of more than five persons in an area continue to remain in place, Mr. Palaniswami said, and clarified that the relaxations would not apply to COVID-19 containment zones anywhere in the State.

The orders against the reopening of cinema halls, swimming pools and entertainment/amusement parks, among others, would continue to be in force.

The suspension of suburban train services too would continue. The ban on religious, social, political, recreational, cultural, educational and other meetings and rallies would also remain in place, he said.

Mr. Palaniswami reiterated his appeal to the people to wear face masks in public places, wash their hands with soap at workplaces and in their homes regularly, and strictly adhere to physical distancing norms.

“Only if you extend full cooperation, the infection could be contained,” he said, addressing the public.

The general public has to follow the guidelines issued by the government while taking part in weddings, funerals and other family functions and while visiting religious places to avoid the spread of the infection, the Chief Minister said.

During his meeting with District Collectors in the morning, Mr. Palaniswami instructed the authorities to give priority to the elderly and persons with co-morbidities when taking samples for RT-PCR testing and while declaring results.

The Chief Minister also instructed them to check whether government and private hospitals are following the Standard Operating Procedure for providing treatment for COVID-19.