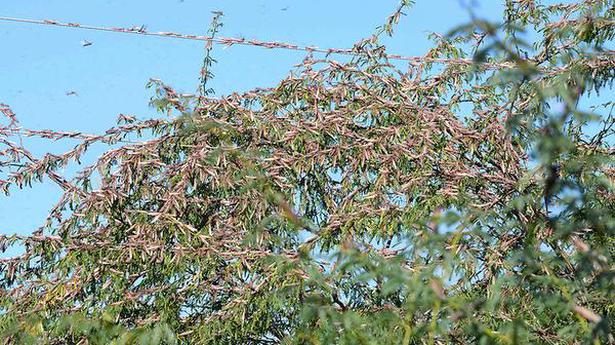 Prof. Rajinder Chaudhary, Advisor, Kudarti Kheti Abhiyan, Haryana has expressed disappointment over the fact that despite the known side-effects of aerial spraying of pesticides, the government’s locust control policy was focussed only on chemical spray.

In a letter to the agriculture Ministers and agriculture secretaries of the Centre and Haryana, Prof. Chaudhary said a number of effective non-chemical remedies were suggested by experts from India and abroad, including Chintala Venkata Reddy, an organic farmer from Telangana, who was awarded the Padma Shri this year, to control locusts without serious side-effects.

Providing a list of these safe and effective measures along with references and sources in the letter, Prof. Chaudhary has requested the government to control locusts only through biological and non-chemical measures rather than hazardous chemical measures.

“If chemical methods cannot be junked all together, then at least in the areas near the population and close to catchment and storage areas of waterbodies, the government must adopt the safer non-chemical measures instead of adopting chemical measures,” said Prof. Chaudhary.

He also referred to a press note recently issued by the Centre indicating steps to increase its capacity for aerial spray of poisonous pesticides for locust control.

According to Prof. Chaudhary, there is no doubt that the locust attack was a menace that could be ignored, but it must also be ensured that locust control measures do not pollute air, water, environment and food chain. While the ill-effects of aerial spraying of dangerous pesticides were well-established, it is rather disheartening that in spite of the fact that the government honoured an organic farmer with the Padma Shri this year, his advice on safe control of locust was being totally ignored by the government.

Delhi might have seen last rainfall of monsoon season: IMD